Pope Francis has arrived in Ecuador, in his first visit since becoming pope to the Spanish-speaking part of South America, bringing a message of solidarity with the poor in the region, while trying to rally his church amid dwindling numbers.

Francis, history’s first South American leader of the Catholic church, arrived in the capital Quito at 19:40 GMT on Sunday for a week-long tour of the continent, which also includes stops in Bolivia and Paraguay.

Crowds had begun gathering on Sunday morning along the route from the airport to the papal nuncio’s residence, where Francis will be staying.

More than a million Roman Catholics are expected at mass in Quito on Tuesday.

Francis, already seen by many as “the pope of the poor”, chose to visit Ecuador, Bolivia, and Paraguay specifically because they are among the poorest and most marginal nations of a region that claims 40 percent of the world’s Catholics.

He is skipping his homeland of Argentina, at least partly to avoid papal entanglement in this year’s presidential election.

Falling world prices for oil and minerals in Ecuador threaten to fray the social safety net woven by President Rafael Correa, who has been buffeted for nearly a month by the most serious anti-government street protests of his more than eight years in power.

While in Ecuador, Francis will also be forced to confront a sex abuse scandal which has tainted the church, said Al Jazeera’s Lucia Newman, reporting from Quito.

Dr James Hamilton, one of the sex abuse victims, told Newman that the church’s punishment of paedophiles is an insult.

Francis is also likely to raise environmental concerns with Correa and the leader of Bolivia – who have promoted mining and oil drilling in wilderness areas – given his recent encyclical on the need to protect nature and the poor who suffer most when it is exploited.

In that document, Francis called for a new development model that rejects today’s profit-at-all cost mentality in favour of a Christian view of economic progress that respects human rights and safeguards the environment.

In a video message on the eve of his departure, Francis said he wanted to bring a message of hope and joy to all “especially the neediest, the elderly, the sick, those in prison and the poor and all those who are victims of this ‘throwaway culture’.”

Francis’ other stops will include a violent Bolivian prison, a flood-prone Paraguayan shantytown and a meeting with Bolivian rubbish pickers, the sort of people he ministered to in the slums of Buenos Aires as archbishop.

Crowds are expected to be huge. While the countries themselves are tiny compared to regional powerhouses like Brazil and Argentina, they are fervently Catholic: 79 percent of the population is Catholic in Ecuador; 77 percent in Bolivia; and 89 percent in Paraguay, according to the Pew Research Center.

Quito – Tens of thousands of Ecuadorans lined Quito’s December 6 Avenue to wave at the pope in the Popemobile, but many booed when they thought they saw President Rafael Correa’s limousine drive by in the motorcade.

“Get out, get out,” screamed a group of women, ignoring pleas by the church to call a truce to the ongoing confrontation between the leftist government and opponents during the papal visit. One of the papal visit’s themes is precisely reconciliation.

“We should concentrate on the spiritual needs of Ecuador and leave our other problems for later,” said Carmen Diaz, who was carrying a large poster of the pope.

The president himself could not resist the temptation to capitalise on the pope’s visit in his welcome address at the airport.

He quoted the pope’s call for better distribution of wealth over and over, clearly trying to show that his government’s policies are in line with the pope’s teachings.

The pontiff looked serious and told the president: “I think you have quoted me too much.” 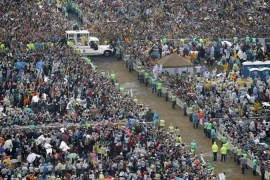 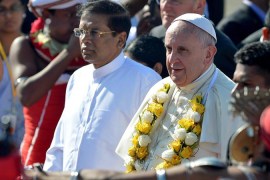 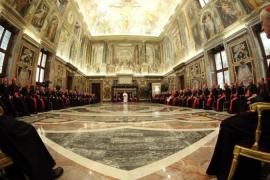