John Kerry has mounted a defence of the Iran nuclear deal, telling members of Congress that rejection of the accord would give Iran “a great big green light” to swiftly accelerate its atomic programme.

In his opening statement on Thursday, the US secretary of state strongly defended the Vienna agreement, saying that with the Iran deal, the US and other world powers have “closed-off all paths to a bomb”.

He dismissed the argument that the US could get a better deal with Iran as “a fantasy, plain and simple”.

Kerry was joined on Thursday by Ernest Moniz, the energy secretary, and Jack Lew, the treasury secretary, as they tried to convince senators to support the deal, amid intense opposition by Israel and pro-Israeli groups in the US.

Moniz, who was also involved with the negotiations, said the agreement “prevents Iran from getting a nuclear weapon”.

Related: The Iran nuclear deal and the Obama Doctrine

“I am confident that the technical underpinnings of this deal are solid.”

Al Jazeera’s Rosiland Jordan, reporting from Washington DC, said Kerry faces the challenge of answering questions from “quite sceptical” senators, adding that “there are going to be some tough questions”.

The hearing marked a new phase of a bruising struggle that will lead to what will arguably be the biggest Senate foreign policy vote in more than a decade.

The deal will take effect unless Congress blocks it, and Republicans in control of the House and Senate have made clear they intend to try to do so in September.

Hillary Mann Leverett, a Georgetown University expert on diplomacy, said that while the three US officials have “enormous credibility” going into the Congressional hearing, convincing senators to support the Iran deal is a “hard sell.”

She also said that it is a risky move for the Obama administration to rely soley on the technical argument to promote the deal, while ceding the political argument to the opponents of the deal.

In his own opening statement, Bob Corker, chairman of the Senate Foreign Relations Committee, declared his opposition to the deal, telling Kerry that US negotiators have been “fleeced” by the Iranians.

On Wednesday, Kerry and the other cabinet officials offered a classified briefing to legislators, away from the media and the public.

Later in the week, Kerry will travel to the Middle East to reassure Gulf Arab officials meeting in Qatar that the US will work with them to “push back” against Iranian influence in the region.

“I will be travelling to Doha in the next couple of weeks to meet with the whole [Gulf Cooperation Council],” Kerry told the pan-Arab Al-Sharq al-Awsat newspaper in an interview published on Wednesday.

He was referring to the group comprising Saudi Arabia, the United Arab Emirates, Bahrain, Kuwait, Oman and Qatar.

Most US allies in the Arabian Gulf region publicly welcomed a deal between world powers and Iran over its disputed nuclear programme, but they accuse the country of interfering in Arab conflicts and pushing hard for heightened regional influence.

“I think we can persuade them both that by being more effective in our counter-push as well as through the restraints we have, they will be significantly strengthened going forward,” Kerry said.

Ayatollah Ali Khamenei, Iran’s supreme leader, told supporters on Saturday that US policies in the region were “180 degrees” opposed to Iran’s and his country would continue to back its allies in Arab states.

Kerry told Al Arabiya television in an interview he found those comments disturbing and troubling.

Few of America’s friends in the region back the deal. 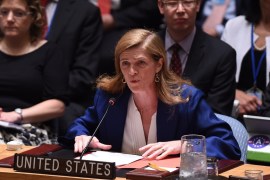 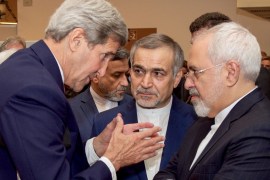 There are fears that the deal to curb Iran’s nuclear ambitions could set the stage for further conflict in the region. 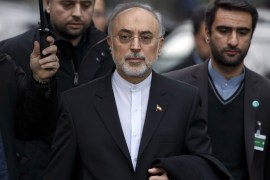