At least 22 people have been killed in Yemen as fighting raged in the southern port of Aden and Arab coalition warplanes bombed Shia rebels in Sanaa, according to military officials and medics.

Thursday’s violence came a day after the UN declared its highest level of humanitarian emergency in the country, where it says some 3,000 people, half of them civilians, have been killed since March.

And the UN’s cultural agency UNESCO said on Thursday that two ancient Yemeni cities on its World Heritage sites list are in danger because of the violence.

The clashes in Aden erupted at dawn in a northern part of the port city, killing seven rebels and five pro-government fighters, a military official told the AFP news agency.

On Wednesday, a rebel rocket fire hit a residential district of Aden, killing 31 civilians and wounding more than 100.

In Sanaa, warplanes pounded several positions of the Houthi rebels around midday on Thursday, residents reported.

Medical sources said eight rebels were killed and at least 10 wounded in the strikes, which they described as the most violent since the beginning of Muslim fasting month of Ramadan two weeks ago.

The UN says more than 21 million people, or 80 percent of the population, are now estimated to be in need of some form of humanitarian aid, or protection, or both. 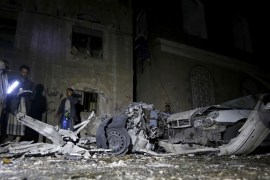 ISIL group claims responsibility for the bomb attack near military hospital in Sanaa that leaves 28 dead. 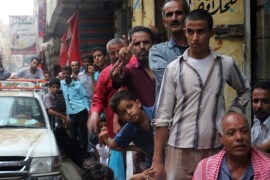 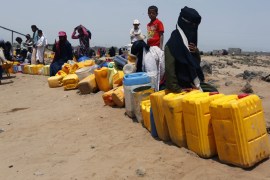