The nuclear deal with world powers is a political victory for Iran, President Hassan Rouhani has said, adding that the agreement meant Tehran would no longer be regarded as an international threat.

Rouhani’s comment came on Wednesday, a day after Iran and six world powers reached the deal, capping more than a decade of negotiations with a landmark agreement.

Thousands of Iranians gathered in the capital, Tehran, to celebrate the deal following the end of Ramadan fast on Tuesday. They waved Iranian flags from their cars, while drivers honked their car horns.

On Tuesday, Obama said the agreement offered a chance to reset strained relations with Tehran.

But not everyone is happy with the deal. Arab countries have deep fears of Iran gaining a nuclear weapon, and some have been skeptical that a deal will prevent that from happening.

But equally high for key Sunni-dominated Gulf allies of the United States is the worry that a deal gives Iran the means and an implicit green light to push influence in the region.

Saudi Arabia issued a pointed warning, saying Iran must use any economic gains from the lifting of sanctions to improve the lives of Iranians, “rather than using them to cause turmoil in the region, a matter that will meet a decisive reaction from the nations of the region,” in a statement carried on the state news agency late on Tuesday.

In a second statement on Tuesday afternoon, Netanyahu said the deal gives Iran incentives “not to change” and said “the world is a much more dangerous place today than it was yesterday”. 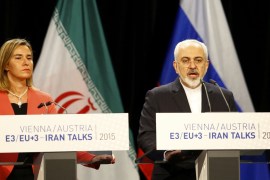