Some of Libya’s warring factions have agreed on a framework for a peace deal following months of talks in Morocco, the United Nations says.

Representatives of municipal councils and the UN-backed government based in Tobruk initialled a draft deal stipulating a transitional period for the establishment of a democratic state in the country.

But a key player – the General National Congress (GNC), the legally installed government in Tripoli – and its allied Libya Dawn militia were not part of the agreement.

Bernardino Leon, the UN envoy for Libya, said the “door is open to all not present” when he announced the draft accord.

“They have also played a critical role in this text. As I have said many times, there is no text that is entirely satisfactory to all parties and that responds to all their demands… I am confident that in the weeks ahead a clear decision will be made and will address all sides and issues,” Leon said.

Al Jazeera’s Menem Elamrani, reporting from Skheirat, where the talks were being held, described the agreement as “an important step forward but not a final deal”.

“The GNC representative was reluctant over the wording,” he said.

“But it opens the way for the Libyans to go forward in a new period and puts the burden on the GNC.”

There is hope that a GNC delegation might return to Skheirat for consultations on the final points of the draft deal after the Muslim holiday of Eid al-Fitr.

One of the key issues where the parties are divided is the status of General Khalifa Haftar. He has been declared the army chief by the Tobruk administration, but GNC want him removed.

The UN-brokered deal will provide the rival groups with a framework to live together and begin a transitional period of one year in which they can decide issues including disarmament, control of the country’s airports and writing a constitution, our correspondent said.

It is viewed as an important step because the parties who wish to join the next period of negotiations would be required to abide by the wording of the draft accord.

In a joint statement, 11 nations that were involved in the talks and the European Union congratulated the delegates “who have demonstrated their responsibility, leadership and courage in this crucial moment by initialling this draft agreement”.

“We call on the remaining delegates and all Libyan decision makers to unite now and to join in supporting this agreement, in the interest of their country and people and in Libya’s common future.”

The role of regional countries including Qatar, Saudi Arabia and Turkey was said to be vital to the pact.

Libya has been divided since the 2011 uprising that toppled and killed former leader Muammar Gaddafi, with two opposing governments and parliaments and armed groups battling to control its cities and oil wealth.

On March 24, the United Nations Support Mission in Libya unveiled a six-point plan to end the crisis, including the formation of a transitional unity government until a new constitution could be adopted and elections held. 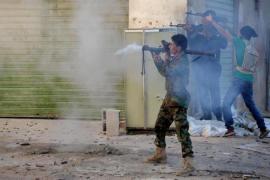 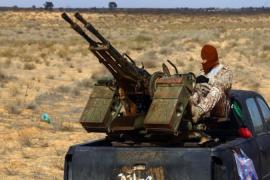 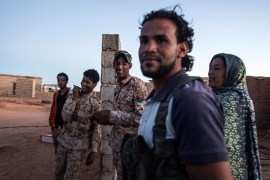 Since September, the conflict has claimed hundreds of lives and displaced most of the region’s population.