The Institutional Revolutionary Party (PRI) is expected to win between 29.87 and 30.85 percent of the ballots in Sunday’s elections, followed by the conservative National Action Party with 21.47 to 22.7 percent, said National Electoral Institute president Lorenzo Cordova.

The result would leave the PRI with between 196 and 203 seats in the 500-member lower chamber of Congress, fewer than the current 207 it won in the 2012 elections.

Its Green Party ally, however, is tipped to increase its representation after securing around seven percent of the vote, resulting in 41 to 48 seats. Another ally, the New Alliance, would get nine to 12 seats.

Pena Nieto appeared on national television to congratulate voters for participating, even though the polls were marred by early violence in several states.

“By voting on this day, the citizens have expressed our political will for the path of institutions. We’ve given direction to our plurality through our democratic system,” Pena Nieto said.

“There were those who tried to affect these elections. In the last few days, they even participated in violent acts, looking to dishearten the population.

“However, despite them, this Sunday, millions of Mexicans went to vote, convinced that democracy is the best path for Mexico. The mandate that citizens have given all of the authorities is to reject violence and intolerance,” he said.

Pena Nieto’s victory came despite a campaign marred by allegations of corruption and for failing to bring drug violence under control, despite his pushing through a raft of economic reforms early in his presidency,

He was buffeted by criticism over the apparent massacre of 43 students in September by a drug gang working with local police.

He then faced accusations of corruption following revelations that he, his wife and his finance minister had bought houses from government contractors.

The biggest loser in the poll was the leftist Democratic Revolution Party (PRD), whose vote fell from 18.4 percent in 2012 to around 11 to 12 percent on Sunday.

The PRD has been hit by infighting. Two-time presidential candidate Andres Manuel Lopez Obrador formed his own party, Morena, which won around nine percent of the vote.

On Sunday, heavily armed convoys patrolled as 40,000 police and troops fanned out across southern Mexico to safeguard the vote.

Activists stole or set fire to dozens of ballot boxes in the states of Guerrero, Oaxaca and Chiapas early on Sunday, but the vote was otherwise largely peaceful.

Al Jazeera’s Adam Raney, reporting from Mexico City, said about 98 per cent of polling stations were able to open despite the violence.

“When we see these dramatic pictures of protests of burning ballots, it shows there’s still a lot of frustration, anger and disgust with the government from various leftist sectors,” Raney said.

Raney said the other big story of the ballot was the victory in the governor’s race in the northern, rich industrial state of Nuevo Leon, of an independent candidate and former rancher, Jaime Rodriguez, known as “El Bronco” for his straight-talking and gruff ways. Rodriguez was the first independent to win such a big prize.

At least seven candidates and nine campaign officials were murdered in an election campaign soured by drug cartel intimidation and teachers protesting against education reforms.

There were 1,374 murders across Mexico in April, the highest monthly total in nearly a year, police data show. 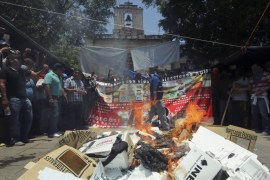 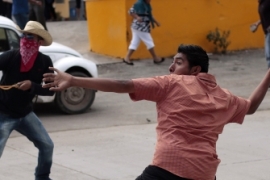