An Egyptian court has said it will announce the verdict in the long-running retrial of three Al Jazeera journalists at the end of July.

Closing arguments in the trial of Baher Mohamed and Mohamed Fahmy were heard on Monday , after the case was adjourned on eight previous occasions.

A third journalist, Peter Greste, is being tried in absentia, after he was released and deported earlier this year.

The journalists are charged with aiding a terrorist organisation, a reference to the Muslim Brotherhood, which was outlawed in Egypt after the army overthrew President Mohamed Morsi amid mass protests against his rule in 2013.

The journalists and Al Jazeera have vigorously denied the accusations, saying they were just doing their jobs.

Al Jazeera’s Fahmy, a naturalised Canadian who has given up his Egyptian citizenship, and Egyptian Mohamed were released on bail in February after spending more than a year in custody.

The journalists were originally sentenced to between seven and 10 years in prison. Egypt’s high court ordered the retrial in January.

Monday’s retrial also comes just a week after Al Jazeera Arabic journalist Ahmed Mansour, was arrested at Berlin airport at the request of the Egyptian government. He was later released by German authorities after spending three days in prison. 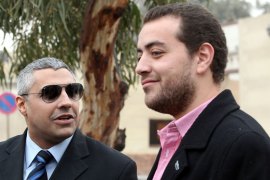