Italy has rescued about 600 migrants in six operations, one in cooperation with Maltese authorities, in the past 24 hours, the country’s coastguard told Al Jazeera.

The rescued people included 100 Somali migrants who were stranded on a plastic boat in the Mediterranean on Tuesday, an official involved in the rescue said.

A coastguard source, contacted on Wednesday, did not to give further details about the operations.

One of the stranded migrants had called Al Jazeera on Tuesday and said the boat was flooding with seawater and that those on board – men, women and children – needed to be rescued immediately.

The migrant contacted Al Jazeera after obtaining the phone contact details of the channel’s journalist from a friend in Somalia.

“We left from Tripoli three days ago and we are going to Italy,” said the migrant who declined to disclose his name to Al Jazeera.

“We don’t have supplies, we don’t have food, there are pregnant women on board. Two of the women have children, a two-month-old, and the youngest one is two weeks… They have been sick since Tripoli. I don’t know what to say,” he added.

Italy on Tuesday renewed its appeal to the European Union for help in managing a relentless wave of migrant arrivals.

“It’s not enough to add 10 or so boats to those [operated] by the Italians,” said Italian Foreign Minister Paolo Gentiloni.

He also demanded the EU’s help in the fight against human trafficking and make reforms to the process of granting asylum to migrants.

Federica Mogherini, the EU foreign policy chief, will brief the UN Security Council on the issue next week as the 15-member body holds a special meeting to discuss ways to address the crisis.

More than 1,750 migrants have perished in the waters between Libya and Italy since the start of this year.

The International Organisation for Migration reported last month that the toll represented a 30-fold increase over 2014. 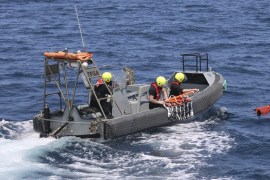 We speak to a Somali who says he is on a migrant vessel in the Mediterranean with 100 others, awaiting rescue. 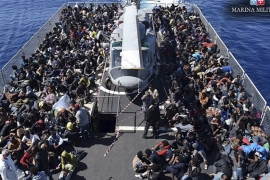 Italy rescues over 6,000 migrants from Mediterranean

At least 6,771 people rescued from Mediterranean Sea off Libyan coast over the past 48 hours, reach Italian ports. 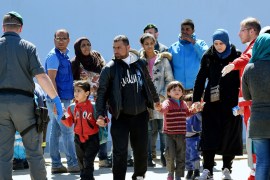