Israeli riot police have fired stun grenades and water cannon on thousands of ethnic Ethiopian Jewish citizens in an attempt to clear one of the most violent protests in memory in the heart of Tel Aviv.

The protesters, Israeli Jews of Ethiopian origin, were demonstrating on Sunday against what they said was police racism and brutality after a video clip emerged last week showing policemen shoving and punching a black soldier.

Demonstrators overturned a police car and threw bottles and stones at officers in riot gear at Rabin Square in the heart of Israel’s commercial capital.

“I’ve had enough of this behaviour by the police, I just don’t trust them any more … when I see the police I spit on the ground,” one female demonstrator who was not identified told Channel 2 before police on horseback had charged.

Al Jazeera’s Mike Hanna, who attended the protest, said the Israeli Red Cross earlier in the evening said at least 40 people, including 23 police officers, were injured.

“All suffered light injuries to the head and upper body,” Hanna said.

Hanna said that it was notable that the injuries weren’t more serious, when Israeli police clashes with Palestinian protesters often ended with far more severe injuries or deaths.

“Very clearly, the Israeli police are capable of riot control that does not involve the loss of human life or severe injury.”

Israeli police later in the evening said at least 46 officers had been injured.

Hanna said the protest began peacefully when demonstrators brought evening rush hour traffic to a standstill for more than an hour by blocking one of the city’s main highways.

There was no immediate sign of demonstrators dispersing and some protest organisers told Israeli media that sections of the crowd had been incited to violence.

The protest turned violent when it later moved to Rabin Square, where Israeli riot police and special forces fired stun grenades and water cannon into the crowds.

Tensions rose after an incident a week ago in a Tel Aviv suburb where a closed circuit video camera captured a scuffle between a policeman and a uniformed soldier of Ethiopian descent, Damas Pakada.

Two policemen have since been suspended on suspicion of using excessive force.

Israeli politicians, stung by community leaders’ comparison of the incident to police violence against blacks in the United States, scrambled to defuse tensions.

Prime Minister Benjamin Netanyahu, taking time out from the final days of negotiations with political parties on forming a coalition government, said he would meet Ethiopian community leaders and the soldier on Monday.

Al Jazeera’s Hanna said the meeting signalled the sensitivity of the Israeli government to claims of racism within Israeli society.

“These claims are made often and they have reached a peak in recent days,” Hanna said.

“The Ethiopians have long argued that they have been marginalised and discriminated against because of the colour of their skin.”

At an earlier protest by Ethiopian Jews on Thursday in Jerusalem, police used water cannon to keep angry crowds away from Netanyahu’s residence, and at least 13 people were injured.

Tens of thousands of Ethiopian Jews affected by famine were airlifted to Israel in the 1980s and 1990s after a rabbinical ruling that they were direct descendants of the biblical Jewish Dan tribe.

The community, which now numbers around 135,500 of Israel’s population of more than 8 million and includes many born in Israel, has long complained of discrimination, racism and poverty. More than half of the Ethiopians in Israel live in poverty and only half graduate from high school.

The Israeli government is also frequently accused of racism for deporting African migrants. In 2013, Israel also admitted to forcibly administering birth control injections to Ethiopian Jewish women without their consent or knowledge.

Ben Hartman of the Jerusalem Post, who also witnessed the protest, told Al Jazeera it was a symptom of a wider problem in Israel.

“It’s a whole range of social issues and a wider failure to integrate the Ethiopian community since the ’80s,” Hartman said. 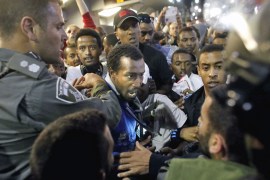 At least 13 people injured in Jerusalem as protesters angered by filmed beating of Ethiopian soldier clash with police. 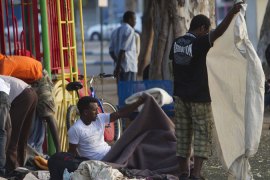 Should Israel be responsible for immigrants?

We discuss why Israel is denying African immigrants their basic rights, as revealed in an annual US human rights report.