Car bombs at two hotels in Baghdad, the Iraqi capital, have killed at least 10 people, with dozens more wounded.

The explosions occurred just before midnight (21:00 GMT) and were heard across the city centre.

The first explosion went off near the Babylon hotel, an upscale and recently refurbished hotel overlooking the Tigris river.

The second car bomb exploded a few minutes later in an area close to the Cristal hotel, the old Sheraton hotel, which is usually crowded at that time on a Thursday.

The blasts appeared to have been coordinated.

Al Jazeera’s Imran Khan, reporting from Baghdad, said the hotels were frequented by members of NGOs and journalists.

Khan said the explosions were significant as both hotels were known to have high security with vehicles and passes thoroughly checked.

Iraqi authorities lifted a decade-old night-time curfew on Baghdad early this year, seeking to restore a sense of normality to the capital as security forces battle ISIL fighters who have overrun large parts of the country.

But the rate of bombings in Baghdad has increased since then. 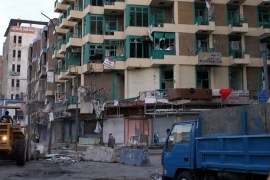 Baghdad’s decade-old curfew to be lifted

Announcement on restrictions imposed on the Iraqi capital 10 years ago coincides with three deadly explosions. 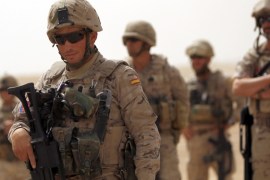 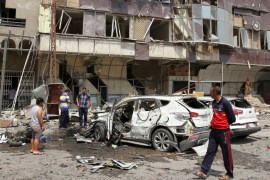