Former Israeli prime minister Ehud Olmert has been sentenced to eight months in prison after being found guilty of fraud.

The sentence was handed down on Monday after Olmert was convicted in March of illegally using around $153,000 given to him in envelopes by New York businessman Morris Talansky between 1993-2002.

Olmert’s lawyers said they would appeal the ruling, the AP news agency reported.

The jail time comes in addition to a six-year prison sentence he received last year in a separate bribery conviction, ensuring the end of his political career.

In that case, Olmert was convicted on two counts of bribery, making him the first former Israeli prime minister to be convicted of the offence and of perjury.

The trial, which included 16 defendants and took place over two years, was linked to the construction of the massive Holyland residential complex when Olmert served as the city’s mayor.

In 2010, Olmert was named the key suspect in the so-called Holyland affair on suspicion that he received bribes totalling some $430,000, although the prosecution later reduced the sum received by about half.

Olmert was forced to resign in early 2009 amid the corruption allegations. His departure cleared the way for hard-liner Benjamin Netanyahu’s election, and subsequent peace efforts have not succeeded. 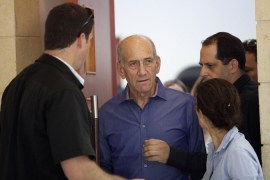 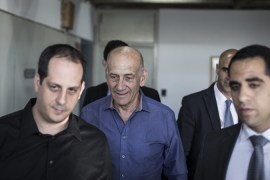