The Islamic State of Iraq and the Levant (ISIL) group have reinforced their self-declared “caliphate” with the capture of the al-Tanaf to al-Walid crossing on the Damascus-Baghdad highway.

Al-Walid crossing is the last border crossing with Iraq that was held by the Damascus government. Except for a short section of frontier in the north under Kurdish control, all the rest are now held by ISIL.

ISIL’s advance, which was preceded by the capture of Anbar’s capital Ramadi and the ancient Syrian city of Palmyra in the past week, comes despite eight months of US-led air strikes aimed at pushing them back.

It has sparked an exodus of tens of thousands of civilians in both countries and raised fears that the ISIL will repeat at Palmyra the destruction they have already wreaked at ancient sites in Iraq.

As ISIL fighters fanned out across Palmyra on Thursday, they went door to door executing suspected loyalists of the Damascus government, the UK-based Syrian Observatory for Human Rights said.

Activists said ISIL had searched through Palmyra for government troops and fighters, using lists of names and informers to track them down and shooting some in the head on the spot, estimating at least 150 have been killed in the past two days.

ISIL takes half of Syria

ISIL now controls “more than 95,000 square km in Syria, which is 50 percent of the country’s territory,” the Syrian Observatory said.

Fabrice Balanche, a French expert on Syria, said “ISIL now dominates central Syria, a crossroads of primary importance” that could allow it to advance towards the capital and third city Homs.

Matthew Henman, head of IHS Jane’s Terrorism and Insurgency Centre, said the ISIL advance boosted its claim to be the most effective of the armed groups fighting to overthrow President Bashar al-Assad.

“It reinforces ISIL’s position as the single opposition group that controls the most territory in Syria,” he said.

The rivals of ISIL, al-Qaeda’s Syrian branch al-Nusra Front, have also been on the offensive as part of a rebel alliance that has stormed through nearly all of the northwestern province of Idlib.

The rebels on Friday overran a hospital in the town of Jisr al-Shughur where at least 150 regime forces and dozens of civilians were trapped for nearly a month, the Syrian Observatory said.

President Barack Obama played down the ISIL advance as a tactical “setback” and denied the US-led coalition was “losing” to the group. 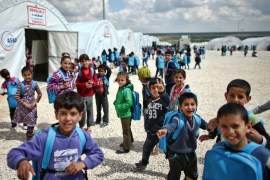