The Islander aircraft was flying over Subi Reef on April 19 when a Chinese vessel radioed a warning, Brigadier-General Joselito Kakilala, a Philippine military spokesperson, said on Sunday.

The Chinese told the plane it was in Chinese territory and ordered it to leave, Kakilala said.

“But our pilots ignored the challenge because of the DOC despite [the plane being] within our territory and they reported the incident to our superiors,” he said in a statement to AFP news agency.

The DOC, or Declaration on the Conduct of Parties in the South China Sea – signed by China, the Philippines and other Southeast Asian nations in 2002 – binds the signatories not to resort to violence to settle their disputes over the South China Sea.

Subi Reef is part of the Spratly islands, a chain of outcroppings in the South China Sea, parts of which are claimed by China, the Philippines as well as Brunei, Malaysia, Vietnam and Taiwan.

In recent years, the Philippines has become more vocal in accusing China of aggressiveness in pressing its claims to the South China Sea, a vital sea lane and fishing ground that is believed to hold vast mineral resources.

In recent weeks, Philippine officials have accused the Chinese of using water cannon and even stealing the catch and fishing gear of Philippine fishermen.

Benigno Aquino, president of the Philippines, is expected to bring up these concerns at the Association of Southeast Asian Nations (ASEAN) summit in Kuala Lumpur on Monday. 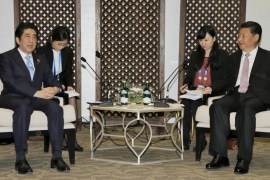 Thaw in ties as Japan and China leaders meet in Jakarta

Japan’s PM urges Chinese president to work with him to ease tensions over territorial disputes, at Asian-African summit. 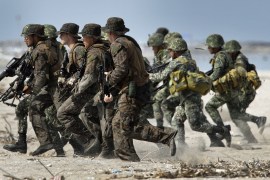 About 12,000 American and Filipino soldiers, double the number from last year, are expected to join the 10-day drills. 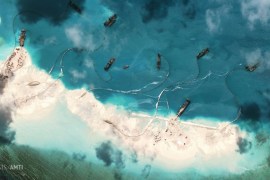