Kenyan security forces have stormed a dormitory held by al-Shabab gunmen who had attacked a university campus in the town of Garissa in northeast Kenya.

The operation began after members of the Somalia-based group killed at least 15 people and took an unknown number hostage after dawn on Thursday.

The sound of heavy fighting could be heard and smoke could be seen coming from the building where the fighters were holed up, witnesses told Al Jazeera on Thursday evening.

“It looks like the final moments of the Westgate mall attack” said Alinoor Moulid, a freelance journalist based in Garissa, referring to the 2013 attack in Nairobi.

The gunmen from the Somalia-based group were holding an “unknown number of student hostages,” the Kenya Red Cross said in a statement. About “50 students have been safely freed”, the organisation said.

The al-Qaeda-linked al-Shabab group said their gunmen were holding Christian hostages inside the complex in revenge for Nairobi’s troops fighting in Somalia.

Rage said the armed group had targeted Kenya for its involvement African Union mission against al-Shabab in Somalia.

“When our men arrived, they released some people, the Muslims, and it is them that alerted the government. We are holding the others hostage,” he said, adding those seized were Christians, but not saying how many there were.

Kenya’s interior ministry released an image of a man they suspect of being behind the attack. Authorities are offering a $215,000 reward for information leading the capture of Mohamed Mohamud, also known as Dulyadin and Gamadhere.

Authorities also claimed to have killed two hostage takers, without confirming how many fighters remained. Cabinet secretary Joseph Nkaissery had earlier said one of the attackers was arrested as he tried to flee the scene.

Seen this man? Report to the security agencies through the numbers provided. #KaaChonjo #GarissaAttack pic.twitter.com/3K3EL3FyoK

Al-Shabab has carried out several attacks in Garissa and across Kenya in the past, including the 2013 attack on a shopping mall in the capital Nairobi.

Kenyan security forces have cordoned off the area, and have entered the compound laying siege to the block where the gunmen are holding their captives.

“According to some of the students who escaped, there are around five gunmen and they entered the university dormitory while students were sleeping,”

“It is hard to tell [about casualties] because the area is now cordoned off, and it is heavily guarded,” he added. “At the moment, I can hear sirens, and at some point I could hear an exchange of gunfire.”

A worried mother of a student holed up in one of the dormitories told Al Jazeera that her son described the situation inside the facility as war zone with gunfire and explosions ranting the air.

“I am worried that my son will get hurt, he told me was hiding and sounded terrified,” she said.

280 of 815 students have been accounted for. Efforts are underway to track the others – CS Nkaissery #GarissaAttack

He did not give details on the number of casualties but said “there are very many”.

Heavy gunfire & explosions inside the university. I met Anastacia at the airstrip with serious gunshot wounds. pic.twitter.com/ZcKQTOQnzh

Police spokesperson Zipporah Mboroki told Al Jazeera that the gunmen were holed up inside the university complex.

“The attackers shot the guards at the entrance of the university. Police officers responded but the attackers managed to get into the [university] hostel,” she said.

“We can confirm that two watchmen were killed; we cannot confirm student casualties,” Mboroki added.

10 bodies admitted at the Garissa Hospital mortuary now. "What we are getting now are just bodies. " – Source at Hospital #GarissaAttack

Al Jazeera’s Malcolm Webb, who is at the scene in Garissa, reported seeing two buses filled with recently freed hostages heading away from the campus.

A student inside the compound told our correspondent that there appeared to be about 200 to 300 hostages.

“We heard that there are only four or five hostage takers but because they have a good vantage position on an upper floor, they have been able to hold off security forces,” he said.

Kenya had advised universities to take increased security measures in light of al-Shabab threats, but two armed guards posted at the institute were shot dead very early on in the attack, Webb added.

Kenya’s President Uhuru Kenyatta sent his condolences in a televised statement and said full details of the casualties would be released shortly.

“We continue to pray for the quick recovery of the injured, and the safe rescue of those held hostage,” he said.

Speaking to Al Jazeera, Farah Maalim, a former Kenyan deputy parliamentary speaker, described the attack on the university as “scary”.

“You cannot fight these isolated attacks with conventional military tactics, which still seems to be the only response,” Maalim said.

“There is a possible intelligence lapse here, and that is no excuse [because] we have state-of-the-art intelligence gathering and plans can be intercepted.”

Maalim said al-Shabab was losing the battle it has been waging in Somalia and Kenya.

“They are on the death bed. They need to be in the limelight; that is why they are going for these soft targets,” he said. 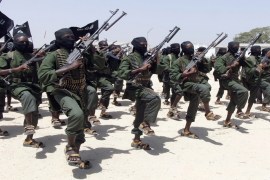 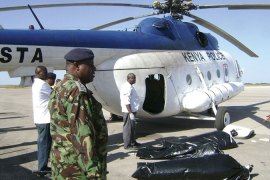 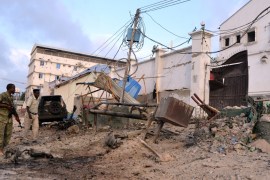 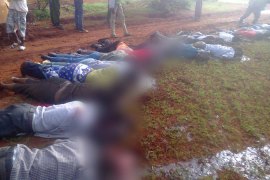