UN chief Ban Ki-moon told participants at the meeting on Tuesday that four out of five people in Syria were living in “poverty, misery and deprivation”.

“The Syrian people are victims of the worst humanitarian crisis of our time,” he said.

The third International Humanitarian Pledging Conference for Syria was attended by 78 member states and 38 humanitarian organisations.

As the Syrian conflict enters its fifth year, the UN had appealed for aid to the 12.2 million people in need, targeting sectors ranging from food and shelter to education and medical supplies.

In addition to the NGO’s and member states, the representatives of the GCC, League of Arab States, the Organisation of the Islamic Cooperation and the European Union were present.

At least 52 people have been killed during air strikes and clashes in several Syrian cities, according to an activist organisation.

The UK-based Syrian Observatory for Human Rights said at least 30 people, including children, had been killed in the city of Idlib in the past 48 hours by government forces using air strikes and surface-to-surface missiles, and that the death toll was expected to rise.

Five people were tortured to death inside government prisons in Deraa, and one man was killed in Homs,  the Observatory said.

Thousands of civilians have fled areas in and around Idlib in fear of a government counter attack after an alliance of rebel groups took over the provincial capital three days ago, the observatory said.

Hadi al-Abdallah, a Syrian activist in Idlib, told Al Jazeera that families had fled to the suburbs of Idlib to escape the recent clashes.

Just as the city was taken over by the rebels they came back to their homes, only to be surprised by government air strikes.

“The air strikes have not stopped since yesterday, it is unbelievable. They are using barrel bombs and targeting the city with heavy bombardment, so many are injured we can not identify the final death toll but I am sure it is over 50.

“All borders with Turkey have been closed, where will these people go? They have nowhere to go,” al-Abdallah added.

“Rebels are asking of civilians in Idlib to cooperate with the brigades to establish a civil administration in liberated Idlib”. 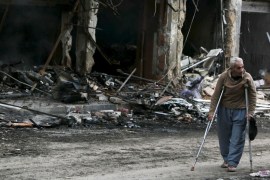