A range of polling firms put a conservative alliance, including Sarkozy’s opposition UMP, in the lead with between 29.7 and 32.5 percent of the vote on Sunday.

The results put a dampener on the recent run of victories for the anti-EU and anti-immigration National Front (FN) led by Marine Le Pen, which had dominated the airwaves during the campaign.

The FN topped opinion polls going into the vote and appeared to be capitalising on France’s stagnant economy.

But the initial results showed it taking between 24.5 and 26.4 percent in Sunday’s elections for 101 “departments”, which have power over local issues such as school and welfare budgets.

That still put it ahead of the ruling Socialist Party of President Francois Hollande, whose failure to address double-digit unemployment has seen him haemorrhage support since he took charge in 2012.

The Socialists took between 19.7 and 24 percent, but a range of other left-wing parties took up to 7.7 percent more, according to pollsters.

The mainstream parties will be able to call on smaller allies when voters return for run-off elections next Sunday, while the FN will struggle to find allies.

“There will be no local or national deal with the leaders of the FN,” declared Sarkozy immediately after the initial figures were released.

The mainstream parties have closed ranks in recent weeks against the FN.

“Tonight, the far-right, even if it is too high, is not the leading political party in France,” said Socialist Prime Minister Manuel Valls.

He called on voters to back either the left or right in next week’s second-round run-offs to keep the far right from power.

The FN went into the elections polling around 30 percent and neck-and-neck with Sarkozy’s right-wing alliance of the Union for a Popular Movement and the Union of Democrats and Independents (UDI).

Le Pen returned to a common theme of her campaign after the results were announced, saying the mainstream parties were conspiring in a campaign of “hate” against her party.

She remained bullish about the initial results, pointing to the fact they were higher than the party’s victorious tally in last year’s European polls.

“This massive vote for the National Front that is taking root in election after election shows that the French want to rediscover their freedom,” she said. 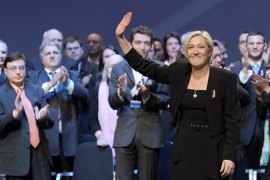 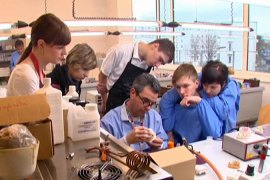