Suicide bombers have attacked two mosques in the Yemeni capital during the rush for Friday prayers, killing 137 people and injuring 345 others, sources told Al Jazeera.

A report on the Houthi-funded Al-Masirah TV channel said the bombers attacked the Badr and al-Hashoosh mosques during midday prayers on Friday.

According to witnesses, one of the suicide bombers detonated his explosives inside the Badr mosque, causing panic as dozens of worshippers rushed toward the outside gates.

A second bomber then attacked amid the panicked crowds trying to escape.

The Islamic State of Iraq and the Levant (ISIL) armed group, an offshoot of al-Qaeda, claimed responsibility for the attacks on Twitter. It threatened that these attacks were “only a part of the coming flood”.

However, Al Jazeera’s Rosiland Jordan said that intelligence experts believe ISIL’s claim was questionable, saying they suspect either al-Qaeda in the Arabian Peninsula (AQAP) or anti-Houthi fighters were behind the attacks.

Nadwa Dawsari, a conflict analyst, said that it is “highly unlikely” that ISIL carried out the attack, and that it was politically motivated.

“I really don’t buy the ISIL propaganda […] Yemen doesn’t have the grounds for ISIL, at least not yet. I think these attacks were politically motivated and whoever ordered them want people to believe its ISIL to achieve political goals”.

The Imam of the mosque and leading Houthi religious leader, Al-Murtada bin Zayd al-Muhatwari was killed in the attack, a medical source said.

“Dozens of people have been injured or killed. We will understand the exact numbers of [the] dead and wounded soon. These are two very central and commonly used mosques,” the editor-in-chief of the Yemen Post newspaper, Hakim Almasmari, told Al Jazeera.

Mohamed Qubaty, a Yemeni political advisor, blamed Saleh and his supporters for the attacks and the instability blighting the country.

“All sides must abide by their stated commitments to resolve differences by peaceful means”, Moon said.

The Houthis, who are accused of being allies to former President Ali Abdullah Saleh, descended from their heartland in northern Saada province last year, fighting their way towards Sanaa and defeating tribal and military rivals along the way.

In September, they flooded the capital, and raided major state institutions and military bases.

Earlier this year, they put Abd-Rabbu Mansour Hadi, the elected president, under house arrest; disbanded parliament and appointed Mohammed Ali al-Houthi, a cousin of the group’s leader Abdel-Malik al-Houthi, as the new president. 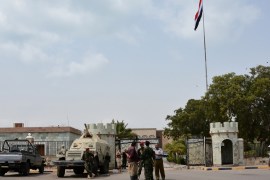 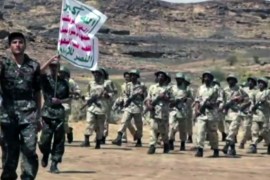 Jamal Benomar warns of “scenarios like Syria, Libya and Iraq” if no peaceful solution is found to country’s standoff.