Soldiers from Niger and Chad have taken the Nigerian town of Damasak from Boko Haram, another victory in a regional campaign to wrest back control of swaths of northeastern Nigeria from the armed group.

Damasak, a few kilometres over the border from Niger, was taken from Boko Haram’s control over the weekend, a spokesman for Niger’s army, Colonel Michel Ledru, said on Wednesday.

In heavy fighting, 228 rebel fighters were killed and one soldier from Niger died, Ledru said. Vehicles and motor cycles riddled with bullets littered the streets.

An Associated Press photographer in the northeastern town said it was largely deserted of civilians.

Four people, including an old man, came onto the street to wave at a convoy among 2,000 troops from Niger and Chad in the town.

There were still signs of the town’s occupation by the rebels. Their writings were scrawled on every wall and the groups’ black and white flag still flew above some buildings.

A group of Chadian troops transferred weapons confiscated from Boko Haram into a pick-up truck truck. They were then taken to helicopters for transport to Niger.

The Nigerian armed group seized Damasak with little resistance on November 24, when residents reported that the rebels drove in flinging firebombs and improvised explosive devices.

Boko Haram has been fighting a six-year insurgency to create an Islamic state and had taken control of large parts of Nigeria’s northeast during the past year. 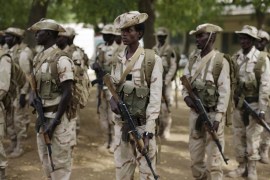 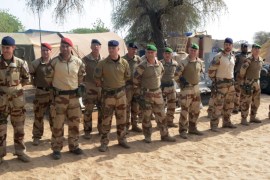 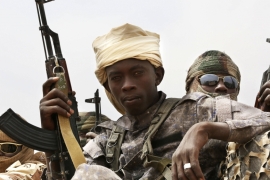