Tens of thousands of people have marched through Moscow in memory of Kremlin critic Boris Nemtsov, who was gunned down in the Russian capital on Friday night.

The slain opposition leader was supposed to have led Sunday’s rally that instead was attended by mourners marching through an avenue alongside River Moskva.

Close to 100,000 people turned out, according to organisers. Police estimated the crowd at more than 16,000.

Nemtsov was gunned down shortly before midnight Friday as he walked across a bridge near the Kremlin.

The killing came just hours after a radio interview in which he denounced President Vladimir Putin’s “mad, aggressive policy” in Ukraine.

“Big anti-Kremlin marches are a rarity these days, with freedom of assembly so tightly controlled by the authorities,” he said.

“The challenge for Russia’s opposition now is whether it can use the emotion generated by Boris Nemtsov’s murder into a re-energised push for political change.”

National investigators who answer to Putin say they are pursuing several lines of inquiry, including the possibility that Nemtsov, who was 55, was killed by Muslim attackers or that the opposition killed him to blacken the president’s name.

Putin’s opponents say such suggestions show the cynicism of Russia’s leaders as they whip up nationalism, hatred and anti-Western hysteria to rally support for his policies on Ukraine and deflect blame for an economic crisis.

“It is a blow to Russia. If political views are punished this way, then this country simply has no future,” Sergei Mitrokhin, an opposition leader, said of Nemtsov’s murder.

Putin has described the killing as a “provocation”, and told Nemtsov’s 86-year-old mother, Dina Eidman, that the killers would be found and punished.

He also promised to do everything possible to bring to justice those responsible for Nemtsov’s killing.

“Everything will be done so that the organisers and perpetrators of a vile and cynical murder get the punishment they deserve,” Putin said in a telegram to Nemtsov’s mother published on the Kremlin’s website.

He said Nemtsov’s death was an irreparable loss and that he had “left his trace in Russia’s history, in politics and public life”.

Nemtsov was one of the leading lights of an opposition struggling to revive its fortunes three years after mass rallies against Putin failed to prevent him from returning to the presidency after four years as prime minister.

Putin has now been Russia’s dominant leader since 2000, when ailing President Boris Yeltsin chose the former KGB spy as his successor, a role Nemtsov had once been destined to play.

Many opposition leaders have been jailed on what they say are trumped-up charges, or have fled the country.

Nemtsov had hoped, however, to start the opposition’s revival with a march in Marino on the outskirts of Moscow on Sunday to protest against Putin’s economic policies and what they see as Russia’s involvement in the separatist war in east Ukraine.

The Kremlin denies any role in the fighting.

Nemtsov had said in an interview that he feared Putin may want him dead because of his outspoken criticism of Russia’s role in Ukraine.

Ukrainian President Petro Poroshenko said Nemtsov had told him about two weeks ago that he planned to publish evidence of Russian involvement in Ukraine’s separatist conflict.

“Someone was very afraid of this… They killed him,” Poroshenko said in televised comments shown in Ukraine. 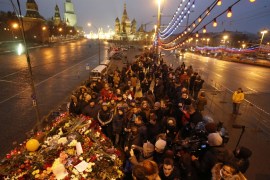 Did Boris Nemtsov, the bogeyman of Russia’s rising nationalism, push his luck by provoking Putin repeatedly? 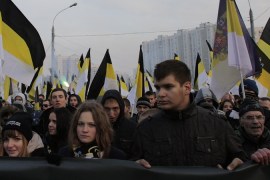 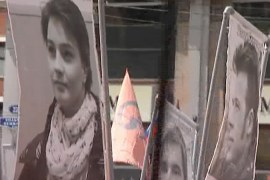 Russians rally for release of protesters

One year after demonstrations against President Putin’s inauguration, many activists remain in jail.