A Myanmar court has sentenced two journalists to two months in prison on charges of defamation, in the latest ruling that raises concerns about press freedoms as the country emerges from military rule.

Thursday’s conviction is the first time journalists have been convicted of defamation since President Thein Sein’s government took office in 2011.

The Myanmar Post‘s chief editor, Than Htaik Thu, and reporter Hsan Moe Tun were charged in February 2014 after their weekly newspaper quoted an unnamed lawmaker from southeastern Mon state making comments about military representatives in the parliament having low education.

Another 10 journalists are serving prison terms for other offences and nearly 20 are facing trials.

The trio were convicted on Tuesday for posting a flyer on social media that showed a psychedelic depiction of Buddha wearing headphones.

Phillip Blackwood, 32, Tun Thurein, 40, and 26-year-old Htut Ko Ko Lwin were given two years for insulting religion and six months for disobeying an order from a public servant.

The trial of the three men came as the predominantly Buddhist nation grapples with a surge of religious nationalism, including violence against members of the minority Muslim community.

They were arrested in December after the image was used on Facebook to promote the tapas bar and lounge, and sparked outrage on social media. 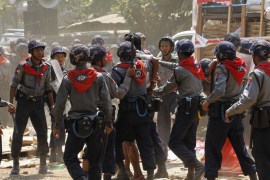 Scores of people protesting against education bill arrested in violent clampdown by baton-wielding police in Yangon. 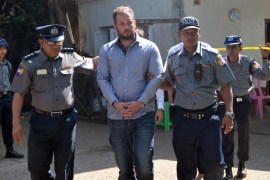 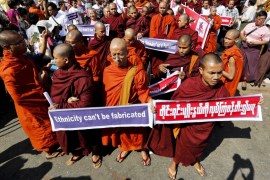