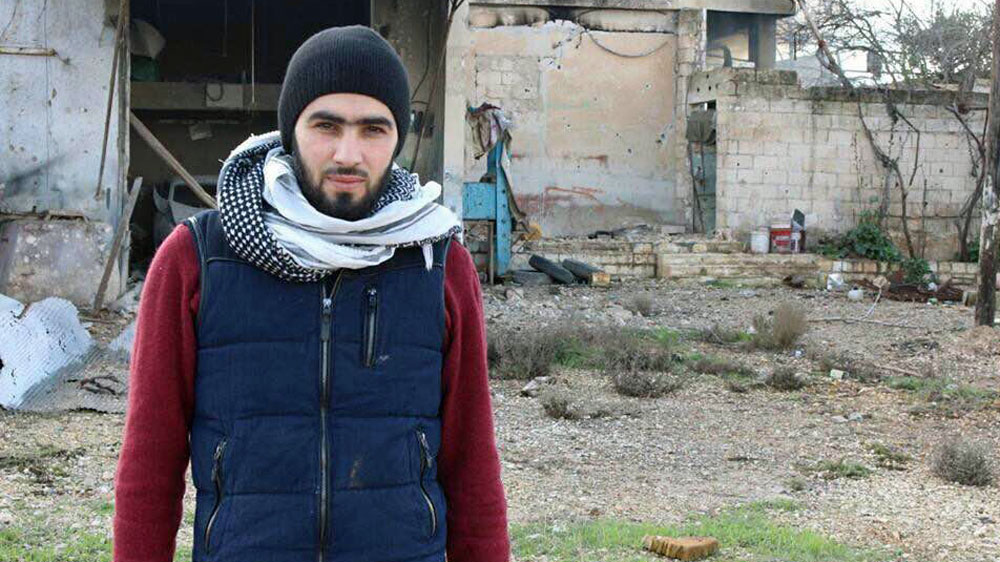 I was teaching and studying for my Masters degree at al-Baath University in Hama when the first wave of protests began. I always dreamt of teaching at a university. Since I was a child I dreamt of becoming a professor, and my dream did come true, but only for a short while.

When the protests broke out in Homs, my friends and I rushed to the scene to take part. I attended the first protests in the heart of Homs, with my face covered to avoid getting recognised [by regime security forces].

After attending several protests, we were stopped at a checkpoint, and the soldier kept my ID card for almost half an hour and went away. No one would tell me what the problem was. That was when it hit me, security around Homs is only getting worse and I could get arrested any day.

It became dangerous to commute back and forth to Hama so I quit my job as a teacher. I had to let go of my dreams- I could not stay silent.

I used to see my parents everyday, but after I decided to dedicate my life to the revolution, I saw them three times a week. Now it has been almost two years [[since I last saw them]] because they live in a regime- controlled area.

The revolution completely changed who I am. Life has changed dramatically. I have been separated from my family, we live in extreme fear and I have seen death several times but now I am used to it.

I had to let go of my dreams. I could not stay silent.

How would I summarise the past four years? it felt like 40 years but we do not regret it. All we demanded was our own rights, our basic human rights.

This revolution was not a mistake. We were let down in many ways; The world did not take the right decisions to end these crimes.

In the past four years we felt abondened on all levels but this will not make us stop, retreat or get bored. We will continue working and protecting our revolution.

My day depends on where I have been living during the past four years. When I was In Quseir, we spent time documenting the battles, the endless bombardment ,the shelling and injuries. We would go to field clinics and document everything we could with the aim to expose [such atrocities] to the world.

In Qalamoun and Yabroud I worked as a mediator between several opposition forces, I tried to unite them. I was their middle man, they heard me and I heard them. In northern Syria cities like Idlib and Aleppo suburbs, I also document and film the battles and the destruction, but most of my days here are spent planning for Syria after the war, working on empowering the women here and including them in the transition phase. My day is dedicated to Syria, everyday.

I was a university student in Hama, and I lived in Homs. I did not like Hama that much I went back and forth for classes and then back home. My life was simple. I played sports most of the time.

It has become normal to see a burnt human body, a corpse without a head and bodies with no limbs, I have seen a lot.

I never thought I would live a life like the one I am living now; four years of my life have gone by but it feels like 20 years.

In the beginning of the uprising, I used to be shocked and terrified when I saw injured or dead people. But because of the many times this has happened, it became normal to see a burnt human body, a corpse without a head and bodies with no limbs. I have seen alot.

I got to a point where I forgot how to live the life I lived before, I do not even remember it. I studied economics, banking and finance – all that I learnt has been deleted from my memory.I feel like I never studied anything. I feel like I did not do anything for my future at all, apart from the fact that I gained a diploma.

I am very depressed, four years have gone from my life just like that. I imagined myself graduating and moving to the Gulf region to work, like most of my friends. Now even if I want to go, no Gulf state will grant me a visa, so my life is pretty much limited to here.

I used to own a mini market in al-Waer district , the last rebel-held area in Homs. Our lives were pretty simple and we were happy, now I know they were the best days of my life.

My life has changed in so many ways I would not know where to begin. We live in destruction, and there is no end to it.

Homes, schools, hospitals and everywhere we look we see destruction. Only a few of us are left here. We have nothing to do but sit and wait, sit and have the whole world turning its back on us.

In the first year of the revolution we had high hopes; we felt that freedom was finally coming our way. As the second year approached we had even higher hopes, and we thought there were bigger plans for Syria, a new and free Syria.
We hoped that Arab states and the international community would come to our rescue , but as a saying in Arabic goes, the ice has melted and the truth about these countries has been revealed.
We were abandoned from day one. The third year brought along with it more blood, more tragedies and destruction. The fourth year proved to us there is no one left [to help us] but God.
We lived through days that I cannot describe, we lived in extreme fear especially our children who are too young to understand.
We lived under very harsh conditions, we have been living in a prison, we barely have any food, no heating and not even the most basic things you need in order to survive.

We feel things are going back to normal; we still have hope that people will feel compassionate again that’s what keeps us going.

We had a house and we lived with dignity, my family and my home were my life.

When the revolution started we were overwhelmed and excited about change. But then I lost my husband and my son. We then lost our house, I basically lost everything one day at a time.

The revolution gave us nothing, we did not get anything but destruction and blood. I lived under the worst conditions in the past four years of my life. I lived in pain, I saw pain in other peoples’ lives.

I now live with my four children in a cave that I call a room. I do not think we should be living here. It is neither safe nor hygienic but it is all I can afford. I pay rent for it too. Only God knows.

I would even say slavery. Now we pay the price for other peoples’ mistakes. We never lived in freedom, we still do not live in freedom and I do not know if we ever will.