Iraqi forces have pounded central areas of Tikrit where several hundred fighters from the Islamic State of Iraq and the Levant (ISIL) group are holding out, officials said.

On Friday, Iraqi troops – backed by Shia militia – fought fierce battles to secure the northern neighbourhood of Qadisiyya and lobbed mortars and rockets into the city centre, which is still in the hands of ISIL.

Thousands of fighters surrounded a few hundred holdout ISIL fighters, pounding their positions from the air but treading carefully to avoid the thousands of bombs littering the city centre.

Two days after units spearheading Baghdad’s biggest anti-ISIL operation yet pushed deep into Tikrit, a police colonel claimed around 50 percent of the city was now back in government hands.

“We are surrounding the gunmen in the city centre. We’re advancing slowly due to the great number of IEDs [improvised explosive devices],” he told the AFP news agency on condition of anonymity.

The offensive to recapture Tikrit is seen as a key step towards dislodging ISIL, which seized much of northern and western Iraq last year and controls about a third of Iraq and Syria.

“Six soldiers were killed and 11 wounded in a suicide car bomb this morning in al-Dyum neighbourhood” in western Tikrit, the colonel said. An army major confirmed the death toll.

Tikrit was the hometown of slain leader Saddam Hussein, remnants of whose Baath party collaborated with the ISIL fighters when they took over almost a third of the country last June.

With crucial military backing from neighbouring Iran and a 60-nation US-led coalition, Baghdad has rolled back some of the losses.

It started with operations to secure the Shia holy cities of Karbala and Najaf and bolster Baghdad’s defences, then worked its way north, retaking Diyala province earlier this year.

Commanders see the recapture of overwhelmingly Sunni Arab Tikrit as a stepping stone for the reconquest of second city Mosul further north, which once had a population of two million. 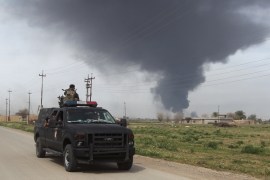 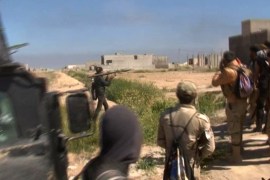 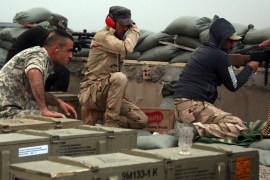 Iraqi forces ramp up fight to wrest Tikrit from ISIL

Defence minister says offensive will continue until the liberation of province of Salahuddin, where Tikrit is based.