Sierra Leone’s Vice President Samuel Sam-Sumana has placed himself in quarantine following the death of one of his bodyguards from Ebola, a government spokesman said as the country reintroduced travel restrictions to combat the spread of the virus.

Sumana “has decided to place himself in precautionary quarantine awaiting the results of tests by the health authorities”, the spokesman said on Saturday.

Sources at the vice president’s office said Sumana is not in danger but had decided to stay out of his office for the next 21 days and work from his home in the west of the capital.

Sierra Leone recorded 18 new cases of Ebola last week, up from 16 new cases the previous week. This breaks the trend of declining cases in Sierra Leone. There were clusters of new cases with many related to the movements of fishermen.

President Ernest Bai Koroma’s new restrictions, announced on Saturday, include a night-time ban on all boats launching from shore and from commercial vehicles off-loading goods in western market areas.

Naval vessels will patrol the shore and wharves, and health checkpoints by the police will be strengthened.

Sierra Leone’s president leaves for Brussels on Sunday to consult with the EU at an international meeting on the fight against Ebola and measures to facilitate reconstruction in the countries hit by the virus.

Ebola, one of the deadliest viruses known to man, is spread only through direct contact with the bodily fluids of the recently deceased or an infected person showing symptoms such as fever or vomiting.

More than 9,500 people have died of the disease since the West African epidemic emerged in southern Guinea in December 2013.

Liberia has registered the highest death toll of 4,037, while Sierra Leone has seen almost half of the total of 23,694 cases.

While Liberia is showing only a tiny handful of new cases each week, Guinea and Sierra Leone continue to be a worry to the authorities, who say they still do not have the epidemic under control. 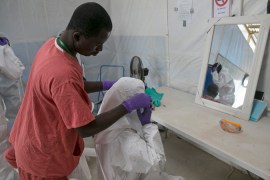 Ebola orphans in Africa do not need saviours 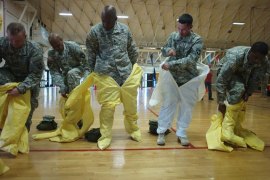 US to withdraw Ebola troops despite new cases

All but 100 US troops deployed to Ebola regions recalled, despite rise in cases in hardest hit West African countries.