The southern African nation of Lesotho held an early election aimed at overcoming tension among political factions that has led to violence among security forces since last year.

Voting proceeded smoothly on Saturday in the mountain kingdom, one of the few countries on the continent to have experienced coalition rule.

The parliament has 120 seats.

Al Jazeera’s Erica Wood, reporting from the outskirts of Maseru, the capital, said many voters expressed frustration with the ongoing political crisis and were hoping the situation would improve after elections.

“There is an optimism that with international observers and security present that this election will be peaceful and bring about change,” our correspondent said.

Analysts said there is a possibility that no party will win a majority, meaning the country could end up with another coalition government.

The country has been politically deadlocked since Prime Minister Thomas Thabane suspended parliament in June last year to avoid a motion that would have seen him ousted after his fragile coalition government, in power since 2012, fell apart.

Three parties – the All Basotho Convention (ABC) led by Thabane, the Lesotho Congress for Democracy (LCD) and the Basotho National Party (BNP) – formed the coalition government.

Casting his ballot in his home district of Abia, near Maseru, Thabane downplayed the risk of unrest.

Thabane, 75, has previously said this will be his last play for power.

His party faces stiff competition from the Democratic Congress, a splinter party from the Lesotho Congress for Democracy formed by Pakalitha Mosisili, a former prime minister, who ruled from 1998 to 2012.

The Democratic Congress won the most National Assembly seats in the 2012 election, but it was Thabane who ended up forming a government, composed of the ABC and two smaller parties.

Thabane described the violence in August as a coup attempt and fled to neighbouring South Africa, though the military denied this, saying they disarmed the police because they were trying to arm parties critical of the prime minister.

About 1.2 million people are registered to vote in the poll, which was negotiated by mediators from the regional bloc Southern African Development Community (SADC).

Initial results will be released on Sunday, said Mahapela Lehohla, chairman of Lesotho’s election commission. Military aircraft will help round up the results by flying them from remote areas to the central counting station in Maseru, according to Lehohla.

#AlJazeera at the polling booths just outside Maseru for #LesothoVotes2015 pic.twitter.com/tb0tXyVFWL 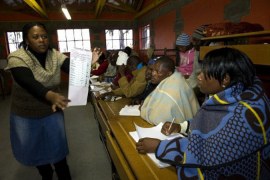 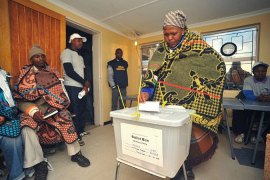