A retrial was ordered by the country’s Court of Cassation last month, overturning a lower court’s verdict that had falsely found them guilty of helping the outlawed Muslim Brotherhood group.

“Bail is a small step in the right direction, and allows Baher and Mohamed to spend time with their families after 411 days apart,” an Al Jazeera spokesman said on Thursday.

“The focus though is still on the court reaching the correct verdict at the next hearing by dismissing this absurd case and releasing both these fine journalists unconditionally.”

Judge Hassan Farid said the next hearing would be on February 23.

A third Al Jazeera journalist, Peter Greste, who was also to be retried, was deported on February 1 under a presidential decree after spending 400 days in prison. He has since returned to his home in Australia.

However, the judge read out Greste’s name during Thursday’s trial in Cairo.

I’m overjoyed that my colleagues and “brothers-in-bars” are at last able to go home to their families. The decision from the court in today’s hearing is a small but significant step that not only allows them to enjoy being at home as I have over the past week; it shows that they are not considered as terrorists.

The judges would not have let them walk out of prison if they felt the pair posed a threat to public security. In fact, none of the charges against us ever implied that we might be involved in acts of violence. Rather, the prosecution alleged that as media professionals, we had some how supported a banned organisation – the Muslim Brotherhood – and broadcast “false news”; in other words that we had violated our professional ethics.

Of course the case is not yet over, but it is a significant step in the right direction. Earlier in the week the Court of Cassation, which overturned our original convictions and ordered the retrial, said that the prosecution had failed to find enough evidence to support the charges in the first place. The retrial could still drag on for months.

And yet Egypt generated considerable goodwill when it released me on February 1st, and today’s ruling has done the same. I’m looking forward to the moment when the court finally recognizes that there is absolutely no basis to the allegations, and dismisses the charges all together. When that happens, we will finally be able to celebrate without restraint.

The three journalists, along with seven colleagues outside the country, were accused of spreading “false news” during their coverage of demonstrations protesting a military toppling of former president Mohamed Morsi in 2013.

Greste, Fahmy and Mohamed were given sentences of between seven and 10 years.

In a bid to secure his own release, Fahmy renounced his Egyptian citizenship so that he could be deported to Canada, where he is also a citizen.

The journalists have repeatedly protested their innocence, saying that they were punished for doing their jobs.

Adel Fahmy, brother of Mohamed Fahmy, welcomed the court decision saying his brother “is being vindicated.”

“He is being vindicated by this, and will be completely vindicated later on when this case all falls apart completely,” he said. Mohamed Fahmy’s fiance, Marwa Omara, also thanked the court “for doing the right thing.”

“We’ve been waiting for this moment for more than a year now. I can’t wait to tell the kids and get them ready to meet their dad.”

Baher Mohamed missed the birth of his third child on August 28 last year.

“I’m hoping that official procedures are swift and easy, so we can be reunited quickly. We shall carry on until all the charges are dropped,” added Rashed. 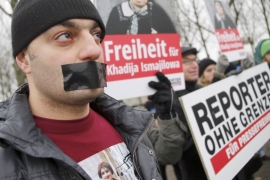 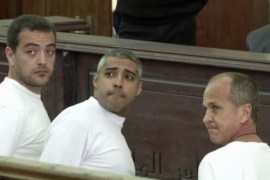