Afghan special forces troops are locked in an intense battle with Taliban fighters in Afghanistan’s strategic Sangin district, after re-taking some government buildings from the armed group, officials said.

At least 20 civilians have been killed during the past 24 hours of fighting, local council officials told Al Jazeera on Friday morning.

The fight for control of the town in southern Afghanistan’s Helmand province has raged for days, with both sides claiming to have the upper hand.

The most recent battle on Friday morning was taking place around the town’s central bazaar, said Al Jazeera’s Qais Azimy, reporting from the provincial capital of Lashkar Gah.

“The government [fighters] have been able to get control of the police headquarters and the district chief’s office,” he said.

Our correspondent said that about 100 Afghan special forces soldiers are believed to have dropped into the Sangin some time on Thursday and that they were now waiting for reinforcements and supplies to be trucked in.

“They are desperately looking to open the road between Lashkar Gah and Sangin so they can supply the soldiers there,” he said.

“But they are facing difficulties on the 70km stretch of road. There are a lot of improvised explosive devices and mines that have been placed by the Taliban, which makes it hard to travel. And they are facing ambushes as well.”

He added that several hundred civilian families are believed to still be in Sangin, mainly those who could not afford to leave.

While not confirming that they had lost control of the police headquarters, a Taliban spokesman told Al Jazeera that the special forces troops had won some ground in Sangin.

Afghan forces in Sangin have been supported by US aircraft, which carried out two attacks in the district on Wednesday, and British forces, which have been deployed to Helmand.

The UK Ministry of Defence said on Tuesday that British troops had been deployed to the province to support local forces after the Afghan defence minister called for a desperate international support and air cover.

This month marks a year since the US-led NATO mission in Afghanistan transitioned into an Afghan-led operation, with allied nations assisting in training local forces.

Modi is expected to hand over four attack helicopters to Afghanistan during his one-day visit. 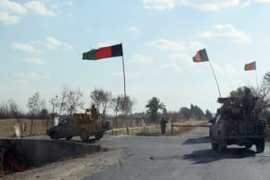 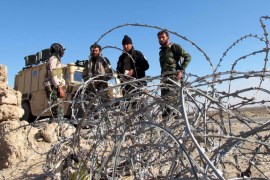 Residents say battle for Sangin district has left them stranded as the clashes continue for the third day. 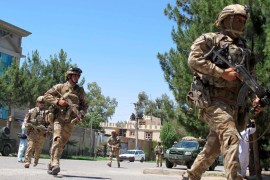