At least nine pupils have been killed by a mortar shell that hit a girls’ school in the Syrian northeastern city of Deir Ezzor, according to state media and a monitoring group.

The Syrian Observatory for Human Rights confirmed the death of the female pupils and said 20 others were wounded in Tuesday’s attack on the elementary school in the government-held district of Harabesh.

“The toll is likely to worsen as some of the injured are in serious condition,” the observatory’s Rami Abdel Rahman told the AFP news agency.

The Islamic State of Iraq and the Levant (ISIL) group controls nearly all of oil-rich Deir Ezzor province since 2013, but half of the regional capital remains in the government’s hands.

Dozens of civilians have been killed in the government-held areas of Deir Ezzor over the past few months in shelling from ISIL-controlled areas.

A source in the interior ministry, quoted by the state news agency, SANA, said: “Terrorist ISIL this morning launched mortar shells that fell in the campus of a school in Harabesh.”

In recent weeks, the US-led coalition and Russia’s military targeted ISIL fighters in the province with air strikes.

The latest attack comes as the UN announced that the next round of talks aimed at easing the violence in the country will be held at the UN’s European headquarters in Geneva in January.

Last week, the UN Security Council gave its unanimous support to a plan to end Syria’s conflict by summoning rebels and the government to the negotiating table.

With crucial backing from the United States and Russia, the plan aims to install a ceasefire in Syria early next year. 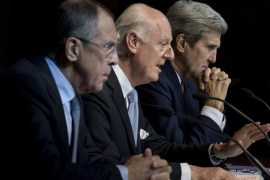 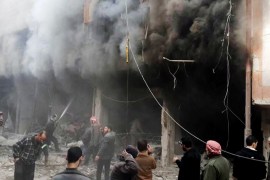 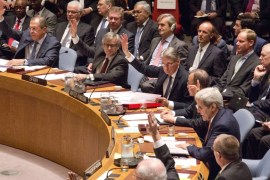