Turkey’s security forces have killed 62 PKK fighters in three days of operations in two mainly Kurdish towns near the border with Iraq, according to the military.

One Turkish soldier was killed in the fighting according to the army statement on Friday, the latest deaths since the resumption of fighting between the Kurdish armed group and the government in July.

The government has imposed 24-hour curfews in the towns of Cizre and Silopi, allowing troops and police, backed by tanks and armoured vehicles, to battle the PKK, who have moved their fight for autonomy to some towns and city neighbourhoods.

The government says the PKK, Kurdistan Workers’ Party, fighters have placed explosive devices, dug trenches and set up barricades in Cizre and Silopi.

It has pledged to press ahead with the operations until no armed rebel remains in the two towns.

Unconfirmed reports have said that thousands of troops have been deployed.

A military statement on Friday said 56 PKK fighters were killed in Cizre and six died in fighting in Silopi since Tuesday.

The soldier was killed in a battle in Cizre.

Al Jazeera could not independently confirm the Turkish military’s account.

Turkey’s pro-Kurdish People’s Democracy Party says at least 63 civilians have been killed by security forces’ operations during curfews that have been enforced in 17 locations since August.

The European human rights body, the Council of Europe, has expressed concern over the curfews that bar residents from leaving homes and prevent observers or journalists from monitoring conditions.

Fighting between the government forces and the PKK flared up in July, killing hundreds of people and shattering a fragile peace process with the fighters.

People scattered into side streets as the intervention began, coinciding with a news conference in the city where pro-Kurdish Peoples’ Democratic Party (HDP) co-leader Selahattin Demirtas had called for “resistance” against the operations. 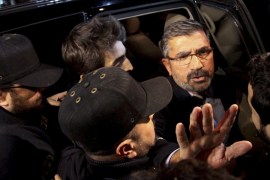 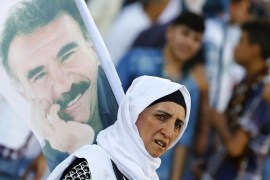