The Philippines’ police board has dismissed 21 officers for being “co-conspirators” in the country’s worst political massacre six years ago when the son of a politician and his bodyguards shot dead 58 people, including 32 journalists.

The officers were dismissed for failing to stop the killings in the southern province of Maguindanao in November 2009, according to a police statement issued on Thursday.

All but one of the officers were found guilty of grave misconduct.

The remaining officer, Inspector Saudi Matabalao Mokamad, was found to have ignored the shooting he heard from the crime scene and to have failed to report it to his superiors.

He was dismissed on lesser charges.

“The 20 respondents were held liable for opting to become silent spectators to a crime unfolding before their very eyes,” said the statement.

“Their inaction manifests complicity and unity of action to those who committed the abduction, and later the murders, themselves.”

The main suspect accused of ordering the killings, Andal Ampatuan Sr, died of a heart attack in a government hospital in July of this year.

His son went on trial in 2010 and is currently in jail.

The officers were accused as “co-conspirators” for setting up a checkpoint and for blocking the convoy of the victims who were on their way to file the certificate of candidacy of Vice Mayor Esmael Toto Mangudadatu, who was running against a member of the influential Ampatuan clan.

She said 22 members of the rival family were among the dead.

“The justice system in the Philippines is renowned for going very, very slowly,” she said.

“A case against a single suspect can take up to 10 years. In this case, there are over 100 named suspects all involved in one major trial. No convictions are expected any time soon.”

The massacre, one of the world’s deadliest attacks against media workers, saw some shot in their genitals before they were buried in a hilltop grave using an excavator.

Lawyers for the victims’ families welcomed the dismissal of the police officers before adding that they were “very disappointed” with the pace of the dismissal proceedings.

“This is the very first time since the massacre six years ago that the victims have received some form of justice,” they said.

The slow pace of the legal proceedings has angered the families of the victims and frustrated President Benigno Aquino, who took office in 2010 and promised a verdict before his term finishes in mid-2016. 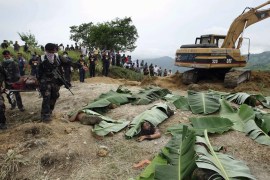 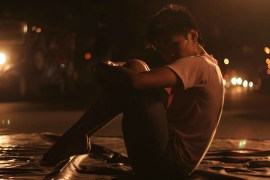 Discover the story of two boys who lose their parents because of political activism.