Russia’s military is taking an active role in ground operations in support of the Syrian army’s fight against the opposition, a report by a group of Russian activists has alleged.

The report contradicts Moscow’s claim that Russian intervention is limited to air strikes and providing military advisers and equipment.

Speaking to Al Jazeera on Sunday, Kirill Mikhailov, a spokesman for the Moscow-based Conflict Intelligence Team (CIT) which investigates the Russian military’s activities in countries such as Ukraine and Syria, said the group has discovered that Russian ground forces have been operating in areas that have seen intense fighting across the country.

The group did not confirm whether or not Russian troops were fighting alongside Syrian government troops.

But, Mikhailov said, Russia’s military is providing Syria’s government-backed army with soldiers in offensives in addition to an array of weapons.

“We have seen Russian servicemen way outside of their airbase in Latakia, contradicting reports that Russia is not engaged in the Syrian regime’s ground offensives,” he said.

Related: How is Russia financing its war in Syria

The report has confirmed that Russia has been backing Damascus with a wide range of military hardware, including heavy tanks and ballistic missiles.

Mikhailov also said that if Russian troops have not already engaged in fighting alongside the Syrian army, “it will probably be their next step”, as he compared the intervention to Moscow’s involvement in Ukraine.

The Russian government has repeatedly said it has no intention of participating in a ground offensive in Syria since it launched its campaign of air strikes on September 30.

Russia has seen minor public opposition to its air strikes in Syria.

On Friday, at least 23 people, including six children, were killed in suspected Russian air strikes on a market in a Damascus suburb, witnesses and a monitor said. 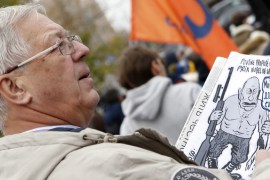