Staffan de Mistura, the UN envoy to Syria, will hold talks with Russian Foreign Minister Sergey Lavrov in Moscow, as diplomatic efforts gather fresh momentum in the wake of Vienna talks on Friday.

“The main subject will be the political process in Syria and starting a genuine dialogue between Damascus and the Syrian opposition,” Russian foreign ministry spokeswoman Maria Zakharova told AFP news agency on Tuesday.

The meeting comes a day after Russia’s foreign ministry said that Syrian people should decide the fate of President Bashar al-Assad.

US and its regional allies have been pushing for Assad to leave power for a political solution, while Russia and Iran have resisted the move.

Asked by a reporter on Tuesday if saving Assad was a matter of principle for Moscow, Zakharova said: “Absolutely not, we never said that.”

“We are not saying that Assad should leave or stay,” Russian news agency, RIA, quoted her as saying.

Zakharova said Russia had not changed its policy on Assad and that his fate should be decided by the Syrian people.

Lavrov and de Mistura met on Friday in Vienna alongside the top diplomats from 17 other key international players on the Syrian conflict, including the US, Iran, and Saudi Arabia, in the broadest push yet to end the four-year conflict.

The participants – who did not include any representatives of the Syrian government or its opponents – agreed to ask the UN to broker a peace deal between the regime and opposition to clear the way for a new constitution and UN-supervised elections.

De Mistura has since been to Damascus to brief the government on the talks and called for a new ceasefire on the ground to build on the diplomatic efforts.

Russia said on Tuesday that it could host a meeting between the Syrian government and unspecified members of the opposition next week in Moscow.

“Next week we will invite them to Moscow for consultations,” Deputy Foreign Minister Mikhail Bogdanov was quoted as saying by Russian news agencies.

“Now we are in contact with the representatives of different opposition groups to get them to come to Moscow.”

Russia said that it handed Saudi Arabia and the US a list at the Vienna talks of dozens of Syrian opposition figures with whom it is liaising in a bid to thrash out who each side thinks represents the factious opposition.

RELATED: Analysis: US Special Forces in Syria, why now?

But the US state department said that it was premature for the Russian government to invite the Syrian opposition to talks in Russia.

Trudeau said that for now nations involved in diplomatic efforts on Syria’s conflict should concentrate on what was agreed on in international talks last week in Vienna.

However, representatives from the Free Syrian Army or FSA say they are at war with Russia – and as long as it continues to bombard their fighters – there can be no dialogue.

Both the Russian and Syrian forces have pounded the Islamic State of Iraq and the Levant (ISIL) stronghold of Raqqa, an area the FSA is still trying to recapture.

At least 23 people were killed on Tuesday in air strikes across the city.

Russian defence ministry says it has hit 2,084 rebel targets since the beginning of its operations in Syria. 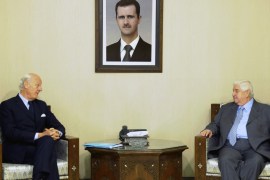 UN envoy wants all sides to participate in Syria talks

Staffan de Mistura says Assad and rebels should be brought to negotiating table to find solution to the bloody conflict. 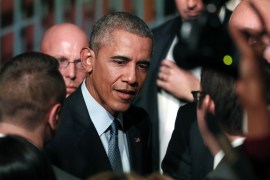 Obama: No US troops on Syria front lines

US president says special forces are deployed to Syria to train rebels, not to fight on the front lines against ISIL.