At least 12 people have been killed, many swept away, after heavy rains lashed western and central Saudi Arabia.

Flash floods rushed through the second city of Jeddah after a line of thunderstorms turned wadis into rivers and alleyways into raging torrents. The skies remained full of dark, billowing cloud, throwing lightning forks, for a good three hours.

Schools and universities suspended classes in both Jeddah and Mecca, the civil defence said, adding that schools would remain closed on Wednesday.

Eight domestic flights at Jeddah’s King Abdulaziz International Airport were delayed due to the rain, while one international flight was diverted to Medina.

The city of Tabuk near the border with Jordan witnessed a heavy downpour on Monday. This happened as the line of storms entered Saudi Arabia from the north, bringing at least 38 millimetres of rain with an accompanying drop in temperature. Tabuk hit 30C on Sunday but is now struggling to make 20C.

Khaybar, Taif, Jeddah and Mecca all felt a drop of 10C as the trough of weather crossed. Although the sun is out again, the cool wind persists. 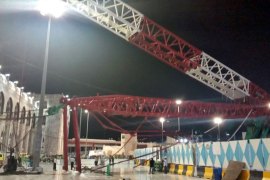