Tunis, Tunisia – Rachid Ghannouchi, the head of the Islamist Ennahdha Party, has said poverty and unemployment are the most important factors in explaining the appeal of terrorism to young people in his country.

The veteran Ennahdha leader said on Saturday that the lack of opportunity created fertile platforms for terrorism to grow, pointing out that “freedom alone does not change much in the lives of people if it is not supported by the rule of law and inclusive growth”.

“Terrorism is very strongly related to economic crisis. Many of the people who took the road of extremism are raised in marginalised and poor areas,” Ghannouchi told the Conservatives and Reformists Summit, which concludes in Tunis on Saturday.

Conservatives and Reformists, the third largest parliamentary group in the European Parliament, are holding a two-day summit in Tunis in order to initiate a political alliance with the centre-right parties.

The summit focuses on advancing the values and capacities of centre-right political parties in the Muslim world, as well as strengthening the moderate centre-right in the post-2011 Arab Spring nations in North Africa and the Middle East.

The Ennahdha leader also said that a misunderstanding and misinterpretation of Islam coupled with a dysfunctional upbringing and lack of education also play a role in feeding terrorism.

Ghannouchi highlighted the role played by his party in preaching Islam as a religion of peace, forgiveness, justice, fraternity, mercy and science.

“We, in Ennahdha party, are not just a political party, but also a school in Islam and Islamic thinking that preaches Islam as a religion of freedom and human rights. That’s is why fundamentalists and terrorists bear a grudge against the Ennahdha movement because we present Islam in a way that differs from them.”

Ennahdha lost power in November’s elections after ruling since 2011.

Organisers of the summit say their choice of Tunisia as the venue was meant to show support for its fight against “terrorism” and to applaud its revolution model.

The security situation has reflected badly on the country’s economy, which relies mainly on tourism.

The economy slumped this summer, following a gun attack on a tourist hotel in a Sousse resort in June that left at least 37 people dead.

“When the revolution took place, thousands of those young people were in jail. During the dictatorial reign, there was a religious vacuum in Tunisia and religious schools that produced moderate religious people were wiped out. Then came some external alien ideologies that filled up this vacuum.”

Ghannouchi said that Tunisia cannot be a home to terrorism and that it will solve its problems through education and true interpretation of religion, as well as through democracy and economic development.

“There is a future for this country where Islam and democracy, peace and civilisation can flourish all together,” he told the participants, urging them to stand with Tunisia in “this historical moment” and through its “democratic transition”.

Ghannouchi featured the importance of investments to create job opportunities, stressing the necessity of adopting new policies and setting a good environment for investment to flourish.

“Reformist projects are highly needed for the Tunisian economy and have already recommended to the Tunisian parliament by the government.

“We are trying to put pressure on the parliament to work faster to open Tunisian markets in order to benefit from private initiatives in order for our economy to attract both external and internal investments,” Ghannouchi told the gathering.

Ghannouchi concluded with stressing the importance of supporting the Tunisian democracy model. 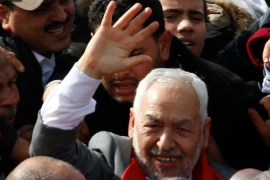