Schmidt, a Social Democrat who led the country through some of its most difficult times, including economic turbulence and Cold War tensions, died on Tuesday at his house in Hamburg, according to German media reports.

German Chancellor Angela Merkel hailed Schmidt as “a political institution” and an authority “whose advice and judgement meant something to me”.

Merkel said Germans had developed a “deep affection” for the former chancellor and were “impressed by his personal humility as well as his sense of duty”.

Schmidt was born a month after the end of World War I in the northern part of Hamburg.

He was elected chancellor by politicians in May 1974 after the resignation of fellow Social Democrat Willy Brandt, triggered when a top aide to Brandt was unmasked as an East German agent.

As chancellor, Schmidt tried to balance a conciliatory tone towards Moscow and Communist East Germany with a strengthening of West Germany’s standing within NATO and Europe.

Schmidt, who had served as finance minister from 1972 to 1974, was in office at the time of West Germany’s “economic miracle”, although he later tried to make some welfare cuts as the situation worsened.

Among his lasting legacies is the euro currency, launched in 1999.

Schmidt and former French President Valery Giscard d’Estaing laid the foundations for the currency in 1978-79, setting up the European Monetary System (EMS) and an embryonic joint currency known as the ECU.

According to reports, Schmidt had never fully recovered from vascular surgery earlier this year and had spent several days in failing condition in hospital.

Schmidt’s friend and doctor, Heiner Greten, told Germany’s Bild newspaper that the former chancellor died with partner Ruth Loah and daughter Susanne at home with him.

“He died the way he wanted: in his bed at home and fully without pain,” Greten said. 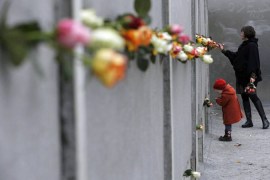 Former Soviet leader Mikhail Gorbachev warns of a new Cold War 25 years after the fall of the Berlin Wall. 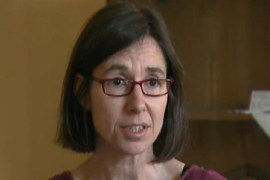 Germans and the Berlin Wall

Al Jazeera reports on how three generations of Germans view the Berlin Wall.