US President Barack Obama called the head of medical charity Doctors without Borders (MSF) and the Afghan president to apologise for the US air strike that hit a hospital in the provincial capital of Kunduz.

Obama called President Ashraf Ghani and MSF President Joanne Liu on Wednesday to express regret for the loss of life in the attack that killed 22 people and injured 37 others.

White House spokesman Josh Earnest said Obama offered his condolences to the aid group’s staff and assured that there would be a thorough and objective accounting of the facts.

Earnest said Obama told the group that the US, if necessary, would make changes so such incidents are less likely to happen again.

Earlier on Wednesday, MSF called for an independent international commission to investigate the attack, which it deems a war crime.

The medical charity said that the inquiry would gather facts and evidence from the US, NATO and Afghanistan, as well as testimonies from MSF staff and patients who survived Saturday’s attack.

Only then would MSF consider whether to bring criminal charges for loss of life and partial destruction of its trauma hospital, which has left tens of thousands of Afghans without access to healthcare, it said.

“If we let this go, as if [this] was a non-event, we are basically giving a blank cheque to any countries who are at war,” Liu said in a news briefing.

“If we don’t safeguard that medical space for us to do our activities, then it is impossible to work in other contexts like Syria, South Sudan, like Yemen.”

In New York, Jason Cone, executive director of MSF in the US, called for the International Humanitarian Fact-Finding Commission to be activated for the first time since its 1991 creation under the Geneva Conventions.

Cone urged Obama to consent to the commission. “Doing so will send a powerful signal of the US government’s commitment to and respect for international humanitarian law under rules of war,” Cone said at a news conference.

Liu spoke of the chaos as the bombs fell for an hour.

“Our patients burned in their beds, MSF doctors, nurses and other staff were killed as they worked. Our colleagues had to operate on each other,” she said.

The US military took responsibility on Tuesday for the air strike.

US Defense Secretary Ash Carter, speaking to reporters in Rome on Wednesday, said: “We are conducting a full and transparent investigation and will make the findings of that investigation known as they are found and will hold accountable anyone responsible for conduct that was improper.”

The US had launched air strikes on Kunduz as Afghan security forces battled to retake the city from the Taliban.

The Afghan Ministry of Defence said on Sunday that Taliban fighters had attacked the hospital and were using the building “as a human shield”, which the medical group denied, while pointing out it would be a war crime not to treat the wounded. 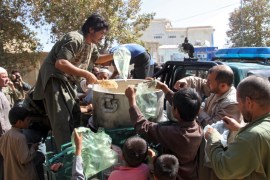 US president offers “deepest condolences” for apparent US bombing of MSF-run hospital in Kunduz that killed 19 people.