By Ylenia Gostoli
Hebron, Occupied West Bank – Fayez Janjoun’s cart at a fruit and vegetable market near Hebron’s Old City was still full of his peppers and cucumbers – even though it was already well into the afternoon.
“Usually there are many people here,” said Janjoun, 71, unfazed by the sound bombs the Israeli military was using to disperse a small group of young men throwing stones and burning tyres only a few metres away.
“But for five days, we saw no customers. Only shooting, tear gas and skunk water. This is the first time something like this happens since the second Intifada. I have a family to feed – what should I do?”
The fruit and vegetable market here is usually bustling, but only a handful of vendors have been showing up for work since unrest engulfed the West Bank and East Jerusalem, following the murders of four Israelis and their Palestinian assailants last weekend.
This was followed by a violent response from the Israeli army and a number of reprisal attacks on Palestinians and their private property by Israeli settlers in the occupied West Bank.

RELATED: A lifetime of restrictions for Palestinians in Hebron

According to the Palestinian Red Crescent, at least 1,600 Palestinians have been injured since October 3.
Eighty-seven have been injured with live ammunition, and 290 with rubber-coated steel bullets.
On Monday, Abdel Rahman Abdullah, a 13-year-old from the Aida refugee camp in Bethlehem, was shot and killed by Israeli forces, prompting further protests and unrest.
Tensions have been mounting since clashes erupted at the al-Aqsa Mosque compound in Jerusalem over access restrictions for Palestinians during Jewish and Muslim holidays.
The director of Princess Alia governmental hospital, Mohammad Zalloun, told Al Jazeera that eight people were being treated there on Tuesday, including an 11-year-old and a 47-year-old who were injured in settler attacks.

It's normal to be attacked here, but these days, it's happening more and more. Yesterday, settlers were throwing stones at us.

The Palestine Red Crescent Society treated 71 people in the Hebron area since last Saturday, most of them injured in clashes in the city of Yatta, in the South Hebron Hills.
Hijazi Abu Maizar, director of the Palestine Red Crescent Society in the Hebron district, told Al Jazeera that approximately two-thirds were treated for tear gas inhalation, and the rest were injured by rubber-coated steel bullets.
“Some of those injured in clashes may choose not to be treated in hospital for fear of arrest. The situation has been tense, and the army has conducted many raids on people’s homes,” said Issa Amro, the coordinator of Youth Against Settlement, a group that organises civil disobedience actions to protest against the presence of settlements inside the city of Hebron.
“Checkpoint 56 [one of the main checkpoints leading to H2, a section of the city under Israeli control] has been closed from 1:30pm every day. At night, people living here don’t leave their homes,” Amro said.
Following an agreement between Israel and then Palestinian leader Yasser Arafat in 1997, Hebron was divided into two sections: H1, which comprises the majority of the city, is under Palestinian Authority control and has the look and feel of any West Bank city, with its lively high streets and markets; and H2, the 20 percent of the city under Israeli military control, is dotted with settlements, which are illegal under international law.
In Hebron’s Old City, most shops are boarded up. But this, in Hebron, is business as usual. The part of the city under Israeli control has become a ghost town, dotted with more than 200 military checkpoints and cameras. Homes and streets are protected by iron barriers and nets.
Janjoun used to run a vegetable shop inside the Old City. But during the second Intifada, it was closed by
a military order, along with at least 440 other stores.
According to human rights organisation B’Tselem, 1,829 businesses – or 77 percent of those operating in the Old City – were forced to close, and at least 1,000 homes were vacated.
Basma Awewi’s home is nestled between the Beit Romano and the Beit Hadassah settlements, in H2. “It’s normal to be attacked here, but these days, it’s happening more and more. Yesterday, settlers were throwing stones at us,” Awewi told Al Jazeera. “I have children and there’s no one here to protect us.”
From her rooftop, one can see the Muslim Cemetery and Shuhada Street, which has been closed to Palestinians since Baruch Goldstein, a member of the far-right Kach party and a resident of the nearby settlement of Kiryat Arba, murdered 29 Palestinian worshippers at the Ibrahimi Mosque.
The site is also known as the Cave of the Patriarchs.
The Israeli authorities’ policy in the Old City is one of separation, which, according to B’Tselem, has led to a policy of segregation between the two communities.
This has resulted in severe restrictions on movement for Palestinian residents, including the closures of

The roughly 600 settlers who live in Hebron enjoy full protection from the Israeli army.
This creates resentment among the city’s Palestinian majority, who say they are subjected to humiliation, arbitrary house searches and the use of excessive force.
On September 22, for instance, soldiers at Checkpoint 56 between H1 and H2 fatally shot 19-year-old Hadeel al-Hashlamon. Amnesty International argued that the killing was an “extrajudicial execution”.
“We always have problems with settlers and soldiers,” said Ayman Jubeh, 45, a shoemaker from the Old City. “Our families are too scared to come and visit us here. But during times like these, things get worse.”
Source: Al Jazeera 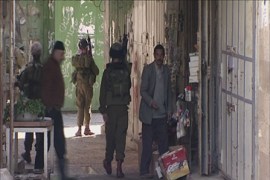 Hebron’s old market population has decreased by 80 per cent in a decade. 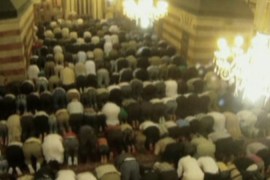 Palestinians flock to Hebron city to mark Ramadan in defiance of Israel’s restriction. 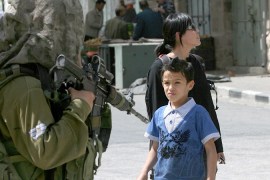 Living in fear in Hebron

Thousands of Palestinian homes have been emptied in recent years, some through evictions and others over restrictions.