Civilian deaths are being reported from apparent air strikes by Russian fighter jets in the Syrian province of Hama and in areas bordering the Idlib province.

A video of the purported raids uploaded to YouTube by activists said at least four people were killed and dozens injured, and that the death toll was expected to rise.

Al Jazeera could not independently verify the reports of the air strikes.

The offensive is targeting Khan Shaykhun, a town in Idlib strategically situated on a rebel-controlled route that connects Aleppo and Damascus.

The developments come at a time when Syrian fighters are targeting government forces and pro-regime units in Hama with Grad missiles, the Syrian Observatory said in a statement.

It said it has “no information about casualties” yet.

On Tuesday, Russian jets hit areas under the control of the Islamic State of Iraq and the Levant (ISIL) group in Palmyra and the northern outskirts of Aleppo.

Against this backdrop, Turkish President Recep Tayyip Erdogan said on Tuesday he was losing patience with Russian violations of his country’s airspace.

Russian officials, for their part, said they would welcome talks with their Turkish counterparts to avoid “misunderstandings”.

“An attack on Turkey means an attack on NATO,” Erdogan said at a Brussels news conference.

RELATED: Has Russia saved the Assad regime from collapse?

NATO has rejected Russia’s explanation that its warplanes violated the airspace of alliance member Turkey by mistake and said Russia was sending more ground troops to Syria.

Jens Stoltenberg, NATO secretary-general, said the alliance had reports of a substantial Russian military build-up in Syria, including ground troops and ships in the eastern Mediterranean.

“I will not speculate on the motives … but this does not look like an accident and we have seen two of them,” he said of the air incursions over Turkey’s border with Syria.

Stoltenberg noted that they “lasted for a long time”. 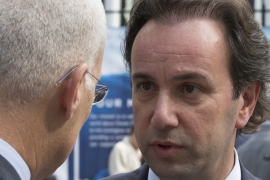