At least 11 people – mostly children – have died in five separate incidents in the eastern Aegean Sea, as thousands of people continue to head to the Greek islands from Turkey in frail boats and stormy weather.

Authorities on the Greek island of Lesbos said 38 people were believed still missing after a wooden boat carrying refugees sank on Wednesday evening. Three people are known to have died, including two small boys.

At first light on Thursday, a helicopter from the European border protection agency Frontex joined the search by Greek coast guard vessels off the northern coast of the island, hours after the dramatic rescue of 242 people.

“Authorities now believe there are very few chances that in these cold October waters – these deep waters between Greece and Turkey – anyone would have survived overnight.

“Two of the survivors told me last night that the sinking of the overcrowded boat occurred when the upper deck collapsed on the lower deck. This caused a large shift in weight which then caused the wooden vessel to capsize.”

Lesbos has borne the brunt of the refugee crisis in Greece, with more than 300,000 reaching the island this year – and the number of daily arrivals recently peaking at 7,500.

In a dramatic scene late on Wednesday, dozens of paramedics and volunteers helped in the effort to assist the survivors, wrapping them in foil blankets and prioritising ambulance transport.

Eighteen children were brought to hospital, three in serious condition, local authorities said. Three adults also died as four other vessels went down on the dangerous sea crossing from Turkey.

Patrol vessels, fishing boats and even locals on jet skis joined in efforts to search into the night for more survivors in the water, struggling with strong winds.

Port police said it was not clear how many people might be in the water, with survivors giving a confusing picture of the number of people who were on the boat that capsized off Lesbos.

The new accidents brought to 39 the number of refugees found dead in Greek waters this month, according to an AFP news agency tally based on data from Greek port police.

“The priority for Europe must remain the secure resettlement of refugees arriving from their countries of origin,” Greek shipping minister Thodoris Dritsas said.

“As long as European nations feed their national egos, smugglers will make enormous sums to the detriment of the lives of refugees,” he added.

Amnesty International’s Deputy Europe Director Gauri van Gulik said it was “obscene that European leaders allowed such a chain of tragedies on its shores”.

Since the start of the year, 560,000 refugees have arrived in Greece by sea, out of over 700,000 who have reached Europe via the Mediterranean, according to the International Office for Migration (IOM).

More than 3,200 people have died during these crossings, most of them children, the IOM says.

The rescues were carried out by Italian, British, Slovenian and German vessels, it said.

Operation Sophia, coordinated by Italy, was set up to arrest smugglers and seize their vessels in the Mediterranean as Europe tries to stem the flow of refugees making the perilous sea crossing.

All the rescued refugees are now headed to Italy, the Italian coastguard said. 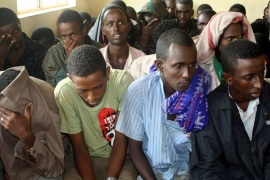 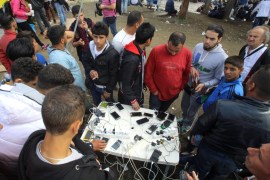 Working with international organisations, Google plans to provide refugees with information critical for their journeys.