East Jerusalem – Since the beginning of October, hundreds of young men from Jerusalem have spent the night in Oz – not the magical fairy-tale land, but a police station in Jabal al-Mukaber.

Like the rest of occupied East Jerusalem, the neighbourhood is mired in neglect and has become a scene of regular clashes between Palestinian youth and Israeli security forces. Those who come to Oz arrive in military vehicles, handcuffed and blindfolded.

According to prisoner support group Addameer, at least 876 Palestinians, including 133 children, have been arrested since October 1 across the occupied West Bank, including East Jerusalem and Israel. According to figures collected by the Wadi Hilweh Information Center in Silwan, at least 60 children were arrested in Jerusalem during the first two weeks of unrest.

Zamzam S, an 11-year-old from the neighbourhood of al-Thori, says he was arrested along with his brother, Khalil, and two of his friends last week while they were playing football in the street; they were all subsequently taken to Oz.

“When we arrived at the police station, there were people with civilian clothes drinking coffee and many civilian cars. So, in the beginning, we thought we were in a public place,” said 14-year-old Khalil. “Behind the parking lot, there were six or seven containers, and that’s where they take you for interrogation. There is a very dim, blue light, so you can’t see the interrogator properly, and this puts you in a stress mode; you can’t see the person who is hitting you.”

Khalil said he was choked and hit on his face and back by a dozen different officers.

“Everywhere you turn, you get slapped then slapped again,” Zamzam added.

Rights groups, including Human Rights Watch, have repeatedly condemned the ill-treatment of Palestinian children by Israeli security forces during arrests and interrogations, including physical violence, threats, and making them sign confessions written in Hebrew.

Israel is a signatory to the UN Convention on the Rights of the Child, which, among other provisions, requires “that a child be not compelled to give testimony or to confess or acknowledge guilt”, and says detention or arrest should only be used as a last resort.

“They tried to make me confess against my brother, saying that he confessed against me,” Khalil said. “They told me there are two police officers who witnessed me throwing a Molotov [cocktail] at a settler’s car.”

“Children regularly report being exposed to ill-treatment and torture during arrest and investigation,” Ayed Abu Eqtaish, accountability director at the Defense for Children International – Palestine (DCI), told Al Jazeera. “Some don’t know the reason for their arrest or do not exercise the right to be with a family member during interrogation.”

While the West Bank has been under military law since Israel annexed East Jerusalem in 1967, the city falls under Israeli civil law. The Israeli Youth Law stipulates that arrest should only be used as a last resort on children, that minors should be summoned before questioning, and that a parent or legal guardian should be present during questioning. Palestinians in occupied East Jerusalem, who remain “permanent residents” though not citizens of Israel, are entitled to equal treatment under the law.

It's collective punishment for the children and a way of gathering information about everyone.

But in practise, they are discriminated against, Abu Eqtaish said, noting evidence analysed from the first half of 2015 that “shows that Israel is using exceptions established by the Youth Law as the norm when dealing with Palestinians”.

For instance, the law allows for the immediate arrest of a suspect only in circumstances where immediate investigation is essential or when summoning the child at a later date wouldn’t be possible.

According to DCI’s research, however, many children are arrested and interrogated for offences they have allegedly committed weeks earlier. Many arrests happen during night raids.

“It’s not just about the child,” said Dalal A, a social worker whose 17-year-old son, Bakir, has been arrested 10 times. “The situation is difficult for everyone. My youngest daughter wet herself the last time soldiers came to the house in the middle of the night.” The repeated arrests have taken a toll on the family’s finances as well, she said, as each time they are required to pay bail.

In July, the Knesset passed an amendment to the Penal Code that raised the maximum sentence for stone-throwing to 20 years.

Israeli police spokesperson Micky Rosenfeld told Al Jazeera that “extra security measures have been implemented, and they will continue for as long as necessary. Officers and investigators have been moved in different areas accordingly”. He declined to comment more specifically on juvenile interrogation and arrest procedures, but said operations and investigations “are carried out according to law and in full coordination with the Ministry of Justice”.

The last time Bakir was taken from his home – on October 11, at the height of the latest spate of unrest – in the East Jerusalem neighbourhood of Ras al-Amud and brought to Oz, he says there were many more officers than in the past, and they were masked.

“They made me [kneel] for a while then took me to interrogation,” Bakir said. Every time he got out of the interrogation room, he says, he was made to go back to that position. The process lasted about six hours.

“They told me my parents were not allowed in the interrogation. They asked me if I threw stones, fireworks, or Molotov cocktails. I kept denying. They made me crouch for half-an-hour with my hands above my head. They said if I didn’t sign [a confession], I’d go to prison for 25 years. But I knew they were lying, so I didn’t.”

Bakir, who once spent 20 days in al-Mascobiya, is no stranger to interrogations. His mother believes that because of his and his father’s existing security files, “every time something happens in the city, they will come and arrest him. We can’t continue this cycle”, she said.

According to Addameer’s lawyer, Farah Bayadsi: “When it comes to arbitrary detention, the police have some information that the children did something, but not enough to put them on trial.”

“The children don’t get charged; they are just being investigated and then released,” Bayadsi told Al Jazeera. “Sometimes, they ask them about others – other children or adults. It’s a collective punishment for the children and a way of gathering information about everyone. But no matter if you put the child in a police station for one hour or one week, it will still affect him.” 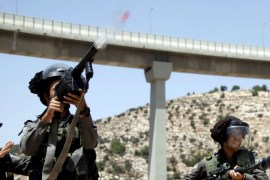 ‘Israeli occupation will not stop without resistance’