At least 25 government forces and opposition fighters have been killed in clashes in Hama province, a UK-based monitoring group said.

The clashes took place in the suburbs of the villages of Kafr Nabudeh and Lahaya, the Syrian Observatory for Human Rights said on Tuesday.

At least seven Hezbollah fighters were also killed in the clashes, the group added.

Capturing Kafr Nabudeh would cut off a major highway, giving pro-government forces access to the northwestern province of Idlib.

Mohammed Issa, a spokesman for the Syrian army, said government forces with the help of airstrikes have made large gains, retaking more than 13 villages on Monday.

Issa said their offensive reached areas between the provinces of Hama and Idlib, where the army is working to cut–off opposition-held areas.

Al-Jolani also called on Muslims in the former Soviet Union to attack Russian civilians if Russians target civilians in Syria.

Russia insists it is mainly targeting the Islamic State of Iraq and the Levant (ISIL) and other “terrorists,” but the multi-pronged ground-and-air offensive is being waged in areas controlled by mainstream rebels as well as al-Nusra Front.

In the capital, Damascus two rockets struck the Russian embassy compound sparking panic as several hundred people gathered to express their support for Moscow’s air strikes campaign in Syria, AFP news agency reported.  It was not immediately clear if anyone had been wounded or killed. 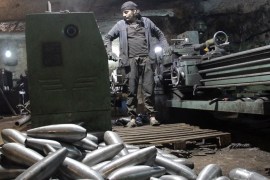