Hopes have faded of finding any remaining survivors of a massive landslide in Guatemala that killed at least 86 people, with hundreds still missing.

On Saturday, relatives of the victims shovelled alongside diggers through the mounds of earth that destroyed homes in Santa Catarina Pinula on the southeastern flank of Guatemala City after Thursday night’s collapse of a hillside.

“I haven’t been able to rest and won’t until I see them again. But asking to see them alive is a lot. They are buried under 15 metres of dirt.”

About 350 people are still unaccounted for, authorities said.

Clutching photos of loved ones, family members stood in line outside a makeshift morgue near the excavation site to see if they recognised any of the corpses.

Loosened by rain, tonnes of earth, rock, and trees had cascaded onto a neighbourhood of the town known as El Cambray II near the bottom of a ravine, flattening houses and trapping residents who had gone home for the night.

Some houses were buried under about 15 metres of earth, and Guatemalan disaster agency CONRED said it doubted any other survivors would be found.

“Hope is the last think you lose, so we hope to find someone alive,” Williams Mansilla, Guatemala’s defence minister, said, though he also acknowledged the likelihood was very low.

Meanwhile, there are fears of more landslides.

“We can see that the hill opposite the slide also runs the risk of a landslide. And on the side that already collapsed there is a fracture that could bring down more earth,” Julio Sanchez, a spokesman for the country’s emergency services, told Al Jazeera. 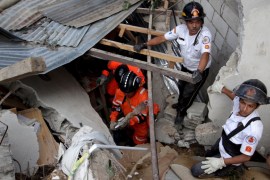 Rescue crews search for survivors after a hillside collapsed onto a town on the edge of the capital Guatemala City.