Yemen’s Houthi rebels have begun a “historic” meeting with just one party after leaders of the southern separatist movement pulled out of discussions to form a presidential council to end the country’s political crisis.

The Houthis seized control of the city in September and placed the president under house arrest, triggering his resignation and creating a vacuum of authority.

Elsewhere in the country, witnesses said Houthis violently dispersed and detained demonstrators during nationwide rallies attended by tens of thousands, denouncing the rebel group with the slogan: “Revolt until the overthrow of the coup.”

Jamal Benomar, the United Nations envoy to Yemen, had been working with political parties on a possible power-sharing deal.

However, on Thursday a faction of the separatist Southern Movement announced that it would stop participating in the “pointless” talks “which will lead the country into the unknown”.

The movement said the talks were taking place “under intimidation and a siege of legitimate authorities”.

In the central Baida province, protesters accused the UN envoy of failing to end Yemen’s crisis. “Out, out Benomar,” they chanted against the diplomat.

The crisis has raised fears that Yemen could become a failed stated. 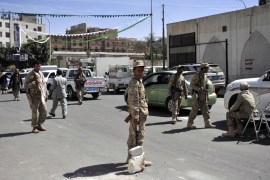