Egyptian security forces have come under attack in the restive Sinai Peninsula, hours after President Abdel Fattah el-Sisi said he would die defending the region from “terror”.

In another attack, gunmen using heavy weaponry and mortar rounds targeted the al-Husn checkpoint in Rafa, on the border with the Gaza Strip, wounding at least six soldiers.

Meanwhile, an interior ministry employee was shot in the head in North Sinai’s regional capital of El-Arish on Saturday.

The violence came after Sisi vowed to defend the Sinai in the “face of terror” after an armed group linked to the Islamic State of Iraq and the Levant (ISIL) claimed responsibility for the killing dozens of soldiers and civilians in the peninsula.

“We will never leave Sinai,” Sisi said. “Sinai is ours. Sinai will not separate from Egypt unless all of us are killed.”

Sisi on Saturday established a special military force to fight armed groups operating in the peninsula.

In an apparent reference to the Muslim Brotherhood, the president blamed the now outlawed group for fighting on Thursday that left around 45 people dead.

“I’ve said it before and I will say it again, we are fighting the strongest secret organisation of the last two centuries,” he added.

The ‘Sinai Province’ group, previously known as Ansar Beit al-Maqdis, claimed responsibility for Thursday’s attack, saying it was retaliating against a government crackdown on supporters of former President Mohamed Morsi.

A military base, a police headquarters, a residential complex for army and police officers, and an army checkpoint were targeted in El-Arish, the provincial capital of Sinai.

Armed groups have regularly attacked security forces in the Sinai since Morsi, a former leading member of the Brotherhood, was toppled by Sisi in July 2013. 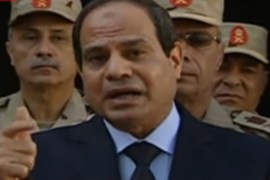 Sisi vows to defend Egypt’s Sinai in ‘face of terror’ 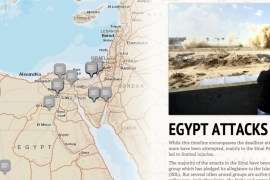 Though attacks became more frequent in 2011, since Morsi’s removal from power in 2013 they have escalated dramatically.