A female protester has been shot dead in central Cairo ahead of the anniversary of the popular uprising that ousted President Hosni Mubarak in 2011.

According to a statement from the socialist Popular Alliance Party (PAP), which organised Saturday’s protest, Shaimaa El-Sabag was killed by birdshot fired by police to disperse demonstrators near Tahrir Square.

The health ministry confirmed the protester’s death. At least six people were also arrested in the violence, the PAP said.

A security crackdown mounted after the army toppled president Mohamed Morsi of the Muslim Brotherhood in 2013 had virtually ended street demonstrations.

But several protests erupted this week in the capital and Egypt’s second city Alexandria in the run-up to the anniversary on Sunday of the 18-day revolt that ended 30 years of rule under Mubarak.

The protest in Cairo came after a student was killed during clashes between anti-government protesters and residents in Alexandria on Friday.

The Freedom and Justice Party, the political wing of the outlawed Muslim Brotherhood, identified the dead woman on its Facebook page as 17-year-old Sondos Rida Abu Bakr, and accused security forces of shooting her during a demonstration, the Reuters news agency reported.

A security official in Alexandria said several people were wounded on Friday in clashes between protesters and local residents but denied that security forces had opened fire to disperse demonstrators. 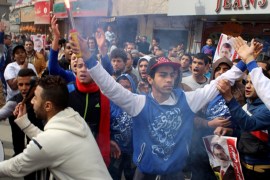