Police have arrested at least 121 people in connection with violence and looting of foreign-owned stores in Soweto  township  in Johannesburg that resulted in the death of at least two teenagers , prompting fears of renewed xenophobia in the country.

Police in South Africa said on Friday that r esidents of the township attacked foreign nationals after a teenager was allegedly shot dead by a Somali shop owner earler in the week. The 14-year-old was allegedly part of a group that had tried to rob the shop.

On Wednesday, as the riots and looting spread to other parts of Soweto, another teenager was killed amid the violence.

“It is alleged that the members of the community staged a revenge and started looting foreign national shops in the area. The owners of shops fired several shots towards the community to defend themselves,” the South African police said in a statement .

Local residents targeted Somali, Ethiopian and even Pakistani-owned shops in the area, forcing foreign shop owners to leave the area out of fear, local media reported  on Friday.

The latest incident has prompted fears of a resurgence in xenophobic attacks, but  authorities have steered clear from framing the attacks as hate crimes targeting foreigners.

Sizakele Nkosi-Malobane, the community safety minister of Gauteng province , told reporters on Thursday that “the actions are pure criminality … For now we won’t declare it xenophobic attacks”.

Thirty-two-year-old Dineo, who hid in her home while the violent clashes took place in her neighbourhood in Protea North, told Al Jazeera that it was an incident waiting to happen.

“There has been tension for a long time now- many locals don’t trust the foreign business owners and the same for them towards us.

“The looters are not just being malicious; they are frustrated and hopeless. They have no confidence in government,” she said.

An official at the Somalia embassy in Pretoria told Al Jazeera there were many rumours surrounding the events of the past week.

“The incidents were not specific to Somalis only, others were also affected, and at this point we can’t comment with certainty on what exactly took place,” the official said.

Police said on Saturday that they had recovered 10 unlicenced firearms and eight foreign nationals were among those arrested.

In 2008, more than 60 people were killed in a series of attacks on foreign nationals. In 2013, a 25-year-old Somali man was dragged through the streets of Port Elizabeth, and pelted with stones and rocks. He later died from his injuries and the assault was captured on a mobile device and shared on social media, prompting international outrage.

The South African government has routinely said that violence against foreigners was a result of criminality and not xenophobia.

In 2012, the African Centre for Migration and Society at the University of Witwatersrand in Johannesburg, said Somali-run businesses suffered from disproportionate levels of crime, including attacks by competing South African businesses. 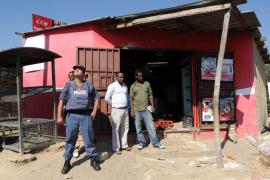 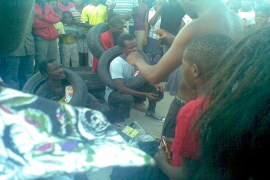