Thai police have arrested a foreign suspect and seized bomb-making materials in the investigation of a deadly shrine bombing that killed 20 people, officials said.

Saturday’s arrest is the first in connection with the bombing at the Erawan shrine in the capital’s bustling downtown district on August 17, which killed mainly tourists in Thailand’s worst single mass-casualty attack.

“We have found components of bomb-making materials in his apartment and I am confident that he is likely involved with the bomb attack,” he said on broadcaster T News.

Police had been searching for a prime suspect, described as a foreign man, who was captured wearing a yellow T-shirt on security cameras and leaving a bag at the shrine moments before the blast.

Al Jazeera’s Scott Heidler, reporting from Bangkok, said it was not clear if the suspect was the same man captured on security camera footage.

Investigators have said the attack was clearly aimed at damaging the tourism industry but insist that Chinese tourists – who visit Thailand in larger numbers than any other nationality – were not singled out.

Earlier this week Thai police said they were not ready to exclude any possibility about who was behind the attack.

Potential perpetrators named by the police and experts have included international suspects, members of Thailand’s southern Malay-Muslim insurgency, fighters on both sides of Thailand’s festering political divide or even someone with a personal grudge.

Some security analysts have also speculated that China’s ethnic Uighur minority – or their co-religious sympathisers – may have been behind the attack, motivated by Thailand’s forced repatriation of more than 100 Uighur refugees last month to an uncertain fate in China.

On Friday, police said three Uighur Muslims, among dozens arrested in the kingdom for illegal entry last year, have been questioned over the bombing.

Bangkok bomb: ‘After the explosion, there was silence’

The bombing of a Bangkok shrine has shaken Thailand. Witnesses to the event have spoken to Al Jazeera. 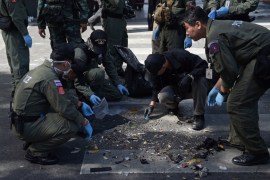 Panthongtae Shinawatra doubles amount offered for information on who was behind attack on a Bangkok shrine.

Erawan shrine reopens as police release sketch of man suspected to be behind attack that left 20 people dead.