Iraqi government forces backed by Shia militias have launched a counter-offensive against the Islamic State of Iraq and the Levant (ISIL) near the central city of Ramadi.

The Iraqi army, backed by US air support on Saturday, pounded ISIL positions near Ramadi, which ISIL fighters captured last week in an embarrassing setback for the Iraqi government and the US-led coalition against the group.

Ramadi, situated about 110km west of Baghdad, is the capital of Anbar province. The strategic city extends along the Euphrates River and is the largest city in the governorate.

Iraqi troops and Shia fighters also deployed to defend Khalidiya, a town just a few kilometres from the Habbaniyah military base. The surroundings of the base saw heavy fighting on Saturday.

“ISIL wants to take control of this base which would serve as a staging ground for the Iraqi army and Shia paramilitary forces when they launch the counter-offensive against the group,” Al Jazeera’s Zeina Khodr, reporting from Baghdad, said.

OPINION: If ISIL is defeated in Ramadi

The spokesperson for the Popular Mobilisation Forces, an umbrella organisation for Shia militiamen, told Al Jazeera that thousands of troops were involved in the counter-offensive against ISIL.

ISIL has also opened a new front in the town of Haditha, the only significant town in government hands in western Anbar, targeting a number of government checkpoints.

ISIL seized towns and cities in northern Iraq last summer and have since expanded their territory in Iraq and neighbouring Syria.

A US-led coalition has since launched air strikes in a bid to stop the group’s advance, with limited success.

On Thursday, ISIL took over the ancient Syrian city of Palmyra. The last government-held border post between the two countries has also fallen.

The US administration has downplayed ISIL’s recent gains but calls are growing for a review of the strategy against the group.

The Iraqi vice president, Ayad Allawi, has said publicly that the aerial campaign is simply not working.

“There is no good news from the international coalition, and there is no strategy, so I asked the Iraqi leaders to put a strategy together and to present it to the coalition,” he said.

“The international coalition meets but without any results, the air strikes do not solve the problem.”

Sunni politicians say they will only aid efforts to combat ISIL if they get a larger say in the running of the country.

“For them, this is the way forward. But there is opposition in Baghdad.” 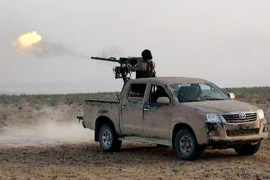