A Saudi Arabian prince’s convoy in Paris has been attacked by armed robbers, who took what the victims told police was around 250,000 euros ($335,000) in cash.

The hold-up took place around Porte de la Chapelle in northern Paris, where the convoy had been heading for Le Bourget airport on Sunday night.

Police said that a gang of “between five and eight” thieves in two BMWs hijacked the first of around 10 vehicles in the convoy, driving off with the three occupants before letting them go.

The Saudis’ Mercedes and one of the attackers’ BMWs were later found abandoned and burned out in the village of Saint-Mesmes, northeast of Paris, approximately 40km from the scene of the crime.

Police said no shots were fired and that there were no injuries.

The local daily Le Parisien reported the men stole documents said to be sensitive according to the victims.

“It’s quite an unusual attack. They were obviously well-informed. It’s true that it’s quite a rare way of operating,” a police source told the AFP news agency.

The investigation has been turned over to the BRB special police unit in charge of armed robberies.

“If they were looking for sensitive documents, that changes the nature of the crime. It will no longer be an armed robbery, but something more complicated,” one source close to the investigation told AFP.

Authorities did not name the prince. 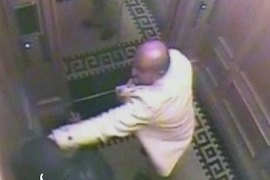 Al-Saud handed a minimum sentence of 20 years after being convicted of murdering his male servant in London.