Ukraine’s president has signed a landmark trade deal with the EU months after his Russia-backed predecessor was toppled following his refusal to forge closer ties with the bloc.

Petro Poroshenko said in Brussels on Friday that the accord, known as the Deep and Comprehensive Free Trade Agreement, marked a “historic day” that offered his former Soviet country a fresh start after years of political instability.

Ukraine will use “the opportunity to modernise,” he said, stressing the importance of peace and security for its future and that of the region. The accord was a “demonstration of EU solidarity,” he added.

Russia immediately said “grave consequences” would follow as the Kremlin sees the deal threatening its influence on the country.

Viktor Yanukovich, Ukraine’s former pro-Moscow president, turned his back on the EU agreement last November in favour of closer ties with Moscow, prompting months of street protests that eventually led to his fleeing the country.

Soon after he fled, Russia annexed Ukraine’s Crimea region, drawing outrage and sanctions from the United States and EU.

‘A great day for Europe’

The accord is part of the “Association Agreement”. which also includes a political cooperation deal, that was signed by Arseniy Yatsenyuk, Ukraine’s acting prime minister, in March.

“This is a great day for Europe… the European Union stands by your side today more than ever before,” Herman Van Rompuy, the head of the European Council, said at the ceremony with Poroshenko and prime ministers of Georgia and Moldova.

“The people of Georgia have chosen democracy, reforms and the irreversible path of European integration,” Irakli Garibashvili, Georgia’s prime minister, told EU leaders at a summit in Brussels.

The policy was launched by Poland and Sweden in 2009, shortly after many of the former Soviet states of central Europe joined the EU, so as also to offer their neighbours further to the east closer ties.

The accords offer a cooperative framework covering a mixture of economic and political areas such as energy, visas and foreign policy and favour the independence of the judiciary and boosting civil society norms through the rule of law and eradicating corruption.

The linked trade deals aim at giving the three countries improved access to the EU’s single market, the biggest in the world with 500 million potential customers. 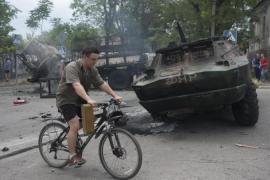 Ukraine’s Mariupol: Suspicion, mistrust and a fear of what’s to come

Ukraine’s port of Mariupol faces an uncertain future, as pro- and anti-Kiev forces struggle for control over the city. 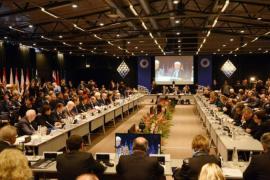 Preliminary deal with the European Union would bring the post-Soviet country closer to the Western bloc. 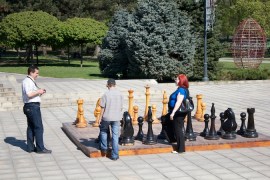 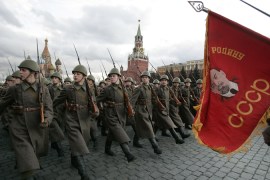 Some post-Soviet states say Moscow is pressuring them to choose a Russia-led union over EU integration.