The Israeli government has decided to halt peace talks with the Palestinians in response to a new unity agreement between rival Palestinian factions.

The decision appears to end a nine-month peace initiative by US Secretary of State John Kerry. The negotiating period is scheduled to end next Tuesday, though the sides had been trying to agree to an extension.

Israel’s Security Cabinet unanimously decided to cut off contact after a five-hour meeting on Thursday. It announced the decision in a statement.

Reuters reported that Israel was also considering imposing economic sanctions against the Palestinians.

The Palestinians said they were considering “all options” in response to Israel’s decisions to halt the talks.

“The Palestinian leadership will look into all options to respond to Israeli government decisions against the PA,” senior Palestinian official Saeb Erakat told news agency AFP.

“The priority now for the Palestinians is reconciliation and national unity,” he said.

Israel is furious over Palestinian President Mahmoud Abbas’s decision to form a unity government with the Hamas movement after a seven-year rift.

Israel and the US consider Hamas a “terrorist” group.

The European Union’s foreign affairs chief Catherine Ashton, meanwhile, welcomed the accord between the Palestinians, but still viewed the peace talks with Israel as a priority, a spokesman for Ashton said.

Kerry was urging Israel and the Palestinians to make the compromises needed to forge ahead with the talks.

“There’s always a way forward, but the leaders have to make the compromises to do that,” Kerry told reporters.

Under the milestone reconciliation pact reached on Wednesday, the Palestinian groups Fatah and Hamas will form a national consensus government in five weeks.

The groups will form a government together to rule the Palestinian territories under the umbrella of the Palestinian Liberation Organisation (PLO) and will hold elections in six months.

Israel cancelled a session of peace negotiations scheduled for Wednesday night after the announcement of a new Palestinian government.

Benjamin Netanyahu, the Israeli prime minister, said in a statement that “whoever chooses Hamas does not want peace”.

Avigdor Liberman, the Israeli foreign minister, described the signing of the agreement as “tantamount to a signature on the end of negotiations between Israel and the Palestinian Authority”.

“There is no doubt that in the international arena there will be … pressure to force (an agreement),” Lieberman said.

“This is our test, to withstand the pressure.” 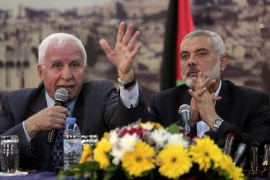 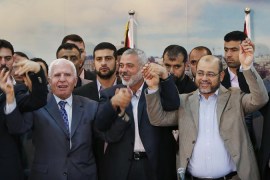 What do Palestinians in Gaza and the occupied West Bank have to say about the unity pact between Hamas and Fatah? 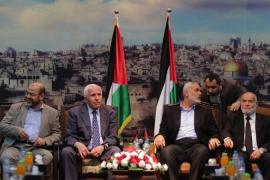 US warns the deal to form unity government could damage its already floundering efforts to forge peace with Israel.